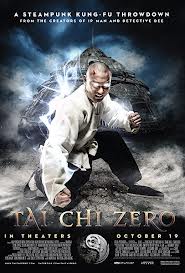 Many people tend to think that kung fu films are redundant. In many ways, those people are right. There is definitely a type of formula to the kung fu film that is a foundation to really build upon in the genre. Yet, it's films like "Tai Chi Zero" that really make that formula unique. In an odd mixture between classic kung fu and the visual comic book style of steam punk, "Tai Chi Zero" modernizes the kung fu film with ambitious energy and the resulting explosion of style and heart is something that may not appeal to everyone, but will certainly garner a vicious and dedicated cult fan base. A cult fan base that I would be more than happy to lead.

Lu Chan (Yuan Xiaochao) was born into a tough world. A birth defect that resulted in an odd bump on his head was the disdain of his father and when his mother perishes, the young boy takes refuge under the watchful eye of a kung fu master garnering troops for a war. What Lu Chan discovers is that this bump is the key to his immense kung fu power and prowess, but when his master is slain in battle he retreats to a remote village to learn inner kung fu. Unfortunately, the locals are not that interested in teaching him and when a scorned young man returns bearing western technology they have bigger issues to deal with.

As someone who always has martial arts films in my watching rotation, I've seen quite a few unique films. I've seen ultra realistic flicks. I've seen ridiculous anime inspired flicks. I've seen everything in between. I have yet to seen anything quite like "Tai Chi Zero." The first of two films (the second film, "Tai Chi Hero" was filmed back to back with this one and the trailer can be seen during the credits), "Tai Chi Zero" is so energetic and silly that despite some of its flaws in overall narrative and simplistically written hero, the film will never fail to entertain. The design of the film is gorgeous from its locales, to the costumes, to the massive "iron monster", and it's even better in the Blu Ray format I consumed it on. And the fight sequences, directed by legendary Sammo Hung, are massively fun and impressive. The over the top nature of its fantasy like elements mostly come into play with its wire work in these moments, but Sammo Hung's brilliance in pacing and strong chemistry of fight sequences is on full display.

This is all slathered in a very tongue in cheek humorous style. Stephen Fung chooses to grace the screen with all kinds of animated wording, odd cartoon swipes for editing, and silent movie style flashbacks. It's pretty obvious that his choice was to modernize the style of film to its max and he does so with full intention. At times the humor can be a bit hit or miss and so can the ridiculous amounts of stylish comic book design, but damn if the film isn't entertaining.

Unfortunately, the film does falter at times giving us the depth needed to sustain the energetic bursts of high wire fighting and oddities of humor. I can't really fault the film too much in how its plot progression works and the odd character development that it cuts out because it does have one thing that prevents me from truly analyzing it as a whole...it's only half of the story. The film literally just ends half way. We don't get any kind of falling action, we don't really see any end to any characters full arcs, and we sure as hell are left with a cliff hanger. In all honestly, I have to dock the movie a bit for leaving me in a frenzy by not knowing how it ends...but then again now I'm stoked to see the next one.

"Tai Chi Zero" is a very entertaining film. It's glorious to look at with its art design and direction. The fighting is top notch and deliciously over the top. It does stumble a bit with its structured narrative and character work and seeing as it's only half of the intended full product it does get docked, but only a little. Fans of the ridiculous and modern style of kung fu are bound to devour this film with relish as it does layer it on thick and despite its flaws, even I was completely enthralled and solid on the idea and style.

When does "Tai Chi Hero" come out?

You know you want to experience the kung fu steam punk style of "Tai Chi Zero." Do yourself a favor, click the links below, order the film for its January 22nd release date, and then show all of your friends. It's a service to society. Trust me.