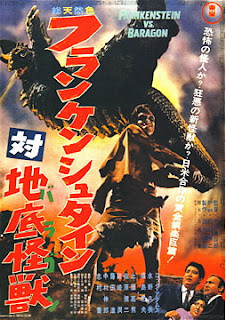 Aka "Frankenstein vs. Baragon"


When I was in high school and caught “Frankenstein Conquers the World” on AMC I thought the idea of having a Frankenstein monster grow to be 400’ tall to be, quite frankly, fucking stupid. Now seeing the film all these years later I can honestly say it’s still fucking stupid, entertaining, but still dumb as all hell. What else can I say other than this is a truly bizarre entry into “Toho Universe” of science fiction films that are connected to the “Godzilla” franchise.

Durring World War II the Japanese military transports a heart from Frankenstein’s laboratory in Germany to Japan for further testing. Then comes the U.S. nuclear bomb attacks irradiating then heart with radiation. Jump ahead 20 years and a couple of scientists find a awkward fella wondering the streets, killing and eating animals. It just happens to be a Frankenstein monster and its radioactive heart is causing him to grow at an incredible rate. Soon he escapes form his cage and it’s up to our Frantic scientists to find a way to put him down but Frankenstein pulls a ‘zilla’ form the crummy American “Godzilla” remake and somehow disappears without a trace. But wait… that’s not the worst part! A subterranean floppy eared dinosaur has appeared and is tearing up the countryside and eating innocent folks. Who will win this battle of towering monsters?

Director Ishiro Honda (director of the original “Godzilla”) takes the ridiculous subject matter rather seriously and that just ands to the overall cornball enjoyment of the film. What’s amazing is that the giant Frankenstein monster idea was originally devised for the film “King Kong vs. Godzilla” but eventually Frankenstein was dropped from the film and replaced with King Kong. This explains why Kong in the film grows stronger with electricity in that very film. Funny enough Toho didn’t let the ridiculous concept die and later gave the giant Frankenstein monster his own fucking film – it just boggles my mind! Godzilla fans will also take notice as Frankenstein’s foe Baragon would reappear in the Godzilla franchise in a few films, notably “Destroy All Monsters” and “Godzilla, Mothra and King Ghidorah: Giant Monsters All-Out Attack”.

Though I originally had trouble swallowing the concept of this film when I initially saw it, I can now actually enjoy the film in all its campy ridiculousness. The child in me just loves the idea of seeing a giant 400’ Frankenstein monster fighting a subterranean man-eating dinosaur! Also, depending on which version you watch, one can see the giant octopus from “King Kong vs. Godzilla” join the fight in the international cut of the film which just makes the comic art trashiness crash through the roof! The Tokyo Shock DVD release graciously contains all three cuts of the film (Japanese, U.S., and International Cut). Audiences in Japan had no problem with the idea of a giant Frankenstein monster and “Frankenstein Conquers the World” did well enough to warrant a sequel – “The War of the Gargantuas”.