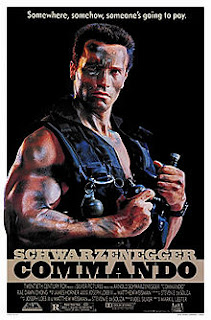 As the first film in my marathon celebrating Arnold Schwarzenegger's return as a lead in "The Last Stand", I felt it was high time to revisit the cult classic "Commando." Although the film is fairly simple in plot and horribly acted, "Commando" is one of those films that is just hard not to love. It's completely over the top with its action and if there was any film that could define 80s bad action films - it would be this one. For the record, I cannot call this a good film. I can call it a delightfully fun film though.

John Matrix (Schwarzenegger) has been living a simple life with his daughter Jenny (Milano) on the outskirts of town. Seeing as he is a retired Colonel who spent most of his life doing horrible things, he has decided to refocus his life around raising his young daughter. That is until a pissed off dictator he overthrew previously decides he wants back into power and he makes the horrible mistake of kidnapping Matrix's daughter in an attempt to make him do his bidding. John now only as 11 hours to find his daughter and kill the bad guys before they kill her. Lock and load.

The 80s. Where the violence unleashed in action films was only dwarfed by the muscles and guns of a film's hero. "Commando" is just that. If you want a film where Arnold talks to people to come to mutual understandings of compromise...well, then you're an idiot for watching "Commando." This film has explosions, bullet riddled bodies, a shirtless Arnold scowling for 90% of the film, and a ridiculous amount of people thrown off of things. Plot is most certainly not the focus of a film like this and besides a brief credits sequence of Arnold and Milano doing silly father/daughter outings (the ice cream is my favorite) there is little in the ways of character or plot progression. That's okay. We get just enough to make sure that there is a reason for the unleashed chaos for the rest of the film.

Although this lack of depth does not make for a great film, it does leave "Commando" plenty of time to simply kick ass. After a brief explanation of our villain, who John Matrix is, and a kidnapping of his daughter the rest of the film jacks it into high gear and never touches the break. Seriously, the pacing of the film is ridiculous. Not only that, but its obvious that director Mark Lester seems to know that the film needed just enough tongue in cheek to be digestible and it works. Arnold ably delivers classic horrible one liners (including one where he just repeats the bad guy with a different word emphasis) and they surround him with an over the top supporting cast that are just there to say/do ridiculous things to make sure the audience is blown away by the significant amount of violence. Yes, Chong is annoying as the leading lady and Wells does not look like he could give Arnold a run for his money as an old team member, but then again they did their job without taking away from the true focus of the film.

That true focus, if you haven't already guessed it, is THE ACTION. This is where "Commando" shines at its brightest and for a week dedicated to celebrating Arnold's career it couldn't have been a better way to kick it off. The Austrian death machine churns out destruction like no one else in this. Whether it's massive exploding complexes, firing an infinite amount of bullets, ripping phone booths out of walls, or using gardening tools to dismember a small army (I shit you not), "Commando" has it all. If you need action, this is where it will be found.

"Commando" just isn't a good film when it comes to judging a film on writing, acting, or directing. It's relatively by the numbers in all of those categories just scraping above low grade. What the film does do well is make for an exciting and entertaining film watching experience. The action is only of the highest quality and in its 80s way, uses extreme violence as a charming aspect to make one overlook the rest.

*BLOODY TRIVIA: There were plans for a sequel to "Commando" and a script was even written, but when Schwarzenegger declined it was retooled. The retooled script ended up being "Die Hard."

If you want one of the quintessential action films of Arnold's career, then I suggest clicking on the links below. Order your copy now. Blow off some steam.