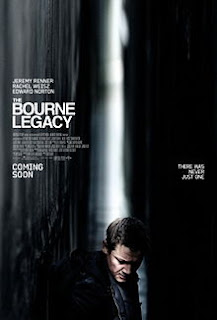 When they first announced that they were going to continue the "Bourne" franchise, I was ecstatic. Despite my general distaste for Greengrass' massive tendency to...you know, bounce the camera everywhere...I quite enjoy this series. Even when both Greengrass and Damon stated they wouldn't be returning for the fourth entry, I was eager to see what they could do with the series. This fourth entry, entitled "The Bourne Legacy", might not be quite the intense ride as the previous entries, but it's just as entertaining. As a bonus, you get to see the action now too!

Aaron Cross (Renner) is part of Operation Outcome, a sister program to Treadstone, except instead of training assassins - it trains soldiers for the battlefield. When Bourne goes rogue and the entire system begins to crash, head hauncho Byer (Norton) decides they need to pull the plug on all of the operations including Outcome. This leaves Cross on the run and the target of a slew of assassins. He needs to stay sharp by taking the medications that give him the increased abilities he has...and that just might mean he needs to head right back into the mouth of the monster to get them.

I find the idea of "The Bourne Legacy" fascinating. Instead of these trained and brutal assassins, we have super soldiers trained in a sister program?! Fuck yeah! That sounds awesome! We get to see more about this government conspiracy to be cutting edge in war? Even better! Yet, it's hard not to be somewhat disappointed with the results of this fourth film. Instead of taking the series in a different direction, it tends to want to tread the same path ways that the first three did - despite being a different kind of hero on the run.

Still, "The Bourne Legacy" is a fun and entertaining jaunt into the world of hidden agendas and super soldiers. Director Tony Gilroy (co-writer of the previous films) tends to know what made the first films such a spectacle for audiences and continues the trend here. He essentially only makes one major adjustment by filming it more traditionally without those Shaky McShakerton camera shots. That already makes it more enjoyable than the last two. He also tends to know how to make the films tense and action packed - even if a lot of it feels far too familiar at this point - so that the pacing is high end for a spy film.

Perhaps the biggest issue I was worried about was Renner in the lead role. Needless to say, I had no issues with him or his character and he made for a very believable and honest hero to root for. While the film strays away from making him more mysterious, it does benefit from making him more relatable by giving him a true goal to accomplish via his back-story of being a simple man by the end of the film. This more human element of the film adds a bit of life to the rather mundane plot progressions we've seen before in the series and makes up for some of the better mystery angles that the previous "Bourne" films could use.

Action wise, the film is pretty awesome. At times the action may not make a lot of sense, including a very realistic drone attack in the beginning that happens to have a very awkward wolf encounter where Renner tackles and wrestles a full grown animal, but that doesn't mean it wasn't damn entertaining. The chase at the end is particularly well shot and perfectly paced. I wish that the villain of the third act (played by Changchien who was the samurai in "Predators") would have been even more deadly, but it is still a great high octane ride.

"The Bourne Legacy" is far from a perfect film. It has plenty of missed opportunities for the concept (I wish they would have gone more action and less spy with the change of hero) and there are definitely some plot holes, but I still had a hoot with this fourth film. I'm definitely excited to see where they go with the franchise from this point...and I hope they resist the urge to bring back Damon and Greengrass before Renner's character has had more time to win us over with his more brutal focused protagonist. "The Bourne Legacy" earns my recommendation!

You know you need to complete your own "Bourne" legacy by purchasing "The Bourne Legacy". Do it at the links below!