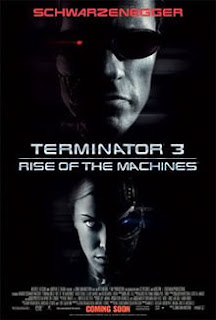 From my childhood, I grew an undying love and devotion to the "Terminator" franchise. One of my first memories of being in a movie theater is seeing "Terminator 2", so when this third entry came out...my entire family went to the theater to see it. It was an event, people. So needless to say, when "Terminator 3" came out as a disappointing rehash of the second film - I was shocked. Confused. Angry. Thusly, I haven't seen the film since I saw it in theaters ten years ago. It's been a decade though and it was high time that this cult film fan gave it a second look... and it still doesn't sit well with me.

John Connor (Stahl) has been on the run for ten years since they were able to avoid Judgement Day. His paranoia of the end of the world remains though and when a new terminator (Loken), a combination of classic and liquid metal models, comes back to start killing Connor and his future Lieutenants he realizes that the future has not been avoided...just postponed. Now he must rely on another friendly cyborg (Schwarzenegger) and an old flame (Danes) to try and stop Skynet from destroying the world...again.

The biggest disappointment that reigns supreme in "T3" is the fact that it rarely adds anything new. I suppose a half assed romantic subplot is something slightly new to the franchise, but beyond that "T3" is truly "T2" rehashed with different characters and different action sequences. It's as if the makers of the film had nothing truly new to say about anything in the "Terminator" mythos so decided to cash on making an action film that thinks its clever. Nothing irritates me more than a film that thinks its clever when its so obviously not. For a science fiction film, it tends to force a lot of its "new" concepts out there including our new villain, a terminator terminator who rarely puts the frights in the audience like Arnold or Patrick did in the previous films. The plot is often rehashed and what is new doesn't necessarily make sense which is frustrating considering how well the blend worked previously.

Then, of course, the film tries to recreate some of the humorous moments that "Terminator 2" pulled off. Because of the lacking depth and thought in the plot/characters though, the humor comes off as too tongue in cheek and is either completely hit or miss. Arnold talking into a man's hand when told "talk to the hand"? Pretty funny. Arnold pulling out stripper star sunglasses to wear as a visual punchline? Not funny at all.

This odd over the top humor does lend itself to some outrageousness when it comes to the action sequences. If there is any reason that "T3" gets the rating that it does, it's because the action sequences are fun and exciting. Although having a crane truck chase seems redundant at this point (with both the previous films having massive semi chases), director Mostow does go all out with it swinging the massive arm to destroy buildings cars and even having Arnold hang from it and being pummeled with debris. The action is a blast to watch, who doesn't want to see one cyborg smash a urinal over the head of a female cyborg, and when "T3" sticks to the outrageousness of its action - then the film is enjoyable.

In the end though, "T3" is just a disappointment. Yes the film is fun and the action is potently over the top, but in comparison to the previous films, which pulled that off AND had great writing on top of that, "T3" stumbles right out of the gate. It's rehash "T2" with less pull and far weaker execution.

Need to complete your "Terminator" franchise? Well, "Terminator 3" is damn cheap. Click the links below to fight the future.