Hello everyone, hope you all had a fun and festive holiday season. I for one am glad its over and I can have more time to do what I enjoy, like watching more anime! For those of you that are not aware, there is a delightful little anime/Asian film website called Crunchyroll.com. I strongly recommend this website. It is a great way to watch anime streaming legally. With that in mind my current review is for Sword Art Online, which I watched on said website. After stumbling across lots of articles and chat boards talking about "SAO," I decided to get to watching it. So come along if you will and share another journey with me.

First I want to say that after looking at my recent anime series I have been watching, I noticed a lot of them are based on light novels. "SAO" is no different, having been written by Reki Kawahara and illustrated by Abec and once again I found myself wrapped up in something unexpected.

What I find unique about this series is that it mostly takes place in virtual reality. While I have heard of other anime series that take on this or a similar approach as well, I for one have not seen anything like this. Keep in mind that my anime watching days are still in their infancy compared to a lot of you out there, so don't be so quick to judge me if I have missed something similar to SAO. 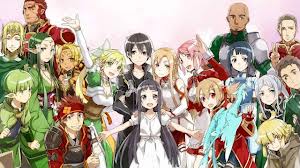 As I was saying, this series takes place mainly in the virtual world with Kirito, a young gamer who is thrust in to the role of hero, at the center of the story. When a new MMO game comes out thousands of players rush to log on, only to learn that they can't log out. During this time the game master makes the formal announcement that everyone had feared, if you die in the game then you also perish in real life. Also if someone in the real world tries to remove your gear you will die . The only way to come out of this game alive is for someone to finish all 100 levels. Another cool thing that this program does is it forces you to play as yourself. Which means you can have a cool user name but your avatar is of your own likeness. This adds a bit of humor to the situation, imagine when you discover your online girlfriend is a dude type of stuff. After the announcement comes many players start scrambling to form or join guilds. Kirito decides to go at it alone. Having been a beta tester for the game Kirito is somewhat familiar with the first few levels of the game. However, after that, its all a game of power. Along the way Kirito meets many players that he helps out in some form or fashion, but none are  more important to him than Asuna. Now enters romance into the game of life and death.  With Asuna, Kirito has met his match of skill and strength, plus she is a pretty good cook as it turns out.  Its about this time in the series where I really fell in love with "SAO".

The story was everything I was hoping for and so much more. With action, comedy, and some romance mixed in, "SAO" is a solid choice. Now I am not a gamer per se, I do dabble but never with an MMO however, I can see that changing in 2013. "SAO" opened my eyes to the possibilities of gaming on my PC among other things. The unique thing about this series is you really have to treat episodes 1-12 and 13-25 as almost 2 different series. This is difficult to explain without giving away too much information. I will say the first half is a lot more action packed and almost exclusively virtual. Whereas the second half jumps back and forth from virtual to real world. It has taken me a little while to really sit back and appreciate everything about "SAO". I am sure even now I am not hitting on every mark.

With that being said, "SAO" has a lot to offer the viewers, the artwork here is beautiful. Almost all of the battles are beautifully orchestrated like a ballet of sorts using vibrant coloring and great animation. The character development and solid story telling are what really hooked me and reeled me in for the duration. If you are looking for fan service and the like "SAO" does not offer up any of that. I found myself impatiently waiting for Saturday to come so I could watch the next episode. I personally hope that Aniplex: a) does a second season. and b) dubs this series and releases the dvd/blu ray very soon. I have recently had a few people actually thank me for recommending this series. So with that said I offer my highest of praises, I strongly recommend this series. It will surprise you and fill your heart with all that warm stuff people talk about.


If you feel like watching something similar to "Sword Art Online" then check out the following recommendations:
Posted by Unknown
Email ThisBlogThis!Share to TwitterShare to FacebookShare to Pinterest
Labels: Anime, Fantasy, Science Fiction, Sword / Sorcery