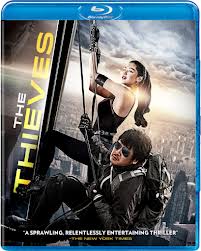 Initially, my impression with "The Thieves" was faulty. The film looked like a rather mundane rehash of the concept and idea behind caper films like "Ocean's Eleven", where a team of quirky characters get together to work out their differences and pull off some ridiculous theft that requires far too much effort and thought to be truly worth the money. I kept hopeful despite these thoughts going into the beautiful looking "The Thieves." The concept of a combination of Korean and Chinese cast was intriguing and the film certainly looked gorgeous, but sometimes it takes more than that to sell a film. To its benefit, "The Thieves" is a much better film than I expected even if it tended to hit the formulaic beats in the first half. Yes, the first half. It's the second half that really caught me off guard...in a great way.

It's the opportunity of a lifetime. At least for thieves any way. A group of South Korean thieves will have to team up with a group of Hong Kong thieves to make it happen though. A massive diamond is being held at a casino in Macau and a rebel thief mastermind Macau Park (Kim Yoon-seok) has to get the two teams to work together to pull it off. As tensions rise between the members, both within groups and against others, the mysteries of their pasts will begin to unfold as betrayal and double face pop up to threaten the entire operation.

The comparisons to "Ocean's Eleven" are quite accurate in many ways. The sleek look of "The Thieves" caters to that larger than life block buster style with epic cinematography and lots of smooth Hollywood style that underlines the entire film. The often comedic bloated egos of are characters tend to be painted a little broad initially and as the groups meet to craft this caper. The acting is impressive enough to get us through a lot of the back stories as we are quickly introduced to a slew of different people and director Choi Dong-hun does an admirable job making sure the audience keeps up with the swiftly moving exposition going on so that we understand the basics of everyone's roles and where they fit into the plot.

Then "The Thieves" does something quite unusual. Instead of dragging out the "problems" with pulling a heist of this size, which it certainly does have as a pertinent place in the plot, it cuts right to the heist by the mid way point. At this time, I felt unsure of where the film would head after this...because it very much followed the formula of the modern caper film up to this point. Quirky characters, ridiculous odds, sleek and fun filming...but what now? At this point, the film jack knifes from comedic caper into a grittier film. A film that borderlines along the lines of a "Mission: Impossible" flick or other action packed espionage franchise. Twists and turns about who is working for who, where characters are, and what needs to accomplish for everyone to win errupt from the formula to bring the whole film to another level. Action sequences cascade down, including a fantastic gun/hand to hand fight while rappelling down the side of an apartment complex (easily the highlight of the film) and the rather mundane back stories of the first act suddenly carry deeper relevance and stronger emotional payoffs than I would have ever expected.

The true caper of "The Thieves" is how it sells itself in a mediocre big budget kind of way for the first half only to reveal that the true film, in the last half, is this massively effective espionage/action flick where all of the information giving is actually relevant. The film saved itself from a 2 and a half blood drop rating and kicked it to a four with this effective twist that I had no idea was coming. Choi Dong-hun definitely pulled one out from under me with his slight of hand scripting and brisk pace. Some of the sub plots might have been a bit underdeveloped (including many of the supporting cast's romantic affairs), but in the end, "The Thieves" was a visually strong and effective thriller whose own tricks worked on this reviewer.

You know you want to be part of the action! So you might as well click the links below to score yourself a copy of "The Thieves" for its February 12th, 2013 release date courtesy of Well Go USA!