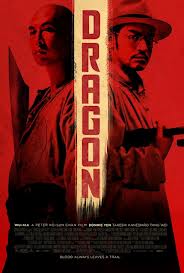 I was anxious to see "Dragon" since it was originally released in 2011, some releases have it under the name "Wu Xia", but lacking US distribution prevented me from experiencing it. Finally, Sony got off their asses to give it a VOD release under the just as generic title "Dragon." Glad they did because this film rocked my socks off. "Dragon" is an odd combination of classic martial arts style mixed with a significant modern film noir twist with a story that isn't all that unlike Cronenberg's "History Of Violence." In the end, its a stellar combination that works on all levels.

When a couple of robbers come to a small peaceful village to rob the local market, Liu Jinxi (Donnie Yen) finds himself in a bad situation. In the scuffle that ensues, he ends up killing the two robbers and ends up a local hero. When a detective (Takeshi Kaneshiro) comes to investigate the circumstances of the robbers' deaths, he starts to see that Liu Jinxi may not be all that he seems to be...that the killing came too easy. In his stern view to uphold justice, he stays to investigate further and uncovers a secret that may have been better left alone.

I consider myself rather lucky that I went into "Dragon" knowing very little about the film. I had read a few reviews, but that was it. I'll try not to give too much away in this review (to give you folks the same experience as I did), because the mystery of the film really makes it work. Although the film occurs in a small rural village in 1917 China, director Peter Chan injects a healthy dose of film noir to create an atmosphere of doubt. He does it with relative charm and style focusing on the strong performance of Takeshi Kaneshiro, a clever narration, and a Sherlock Holmes-esque detective story to start the film off. Donnie Yen's matching stellar performance (the guy only gives his best anymore) gives the duel leads great chemistry to work off of one another to really make the mystery of the film thick and intense.

Wait a minute. Did I sign up for a detective drama or did I sign up for a martial arts film? As it turns out, by the time the second half rolls around the film takes a turn into a picture that heavily pulls on the style and feeling of a classic 1960s Shaw Brothers film. The homages are obvious for those schooled in Shaw films (including an appearance by Jimmy Wang as the villain in the finale) and this film could easily cashed in by claiming to be a "re-imagining" of "The One Armed Swordsman" - even if the makers of the film say that it isn't.

By the time this second half is in full effect, the martial arts roots take full hold albeit with a slightly modern and definite Donnie Yen twist. Yen also acts as action choreographer of the film and the impressive fight and stunt work is obvious. He slightly changes his usually gritty and realistic style in for a more Shaw inspired one and it makes for a riveting last half. The finale fully goes into some outrageous territory as both leads have to battle a vicious villain (one with fists and one with mind) and it's a fantastic watch. Martial arts fans will not be disappointed.

If you couldn't tell, I was riveted by "Dragon." It might be one of Yen's best films to date as it piles on mystery, charm, and ass kicking in a multitude of ways. Never did I feel the film as all that original (I made the illusion to "History Of Violence" and I stand behind that), but stunning performances and a sleek visual style made for a truly engrossing martial arts film experience. One that comes highly recommended.

At this point, "Dragon" is only available via 'on demand' online watching or theaters. I'll post links once they announce a home video release.
Posted by DarkReif
Email ThisBlogThis!Share to TwitterShare to FacebookShare to Pinterest
Labels: Drama, Martial Arts