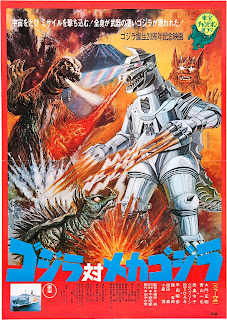 
After a long streak of four trifling films, Toho decided to pull their heads out of their ass and give fans a good sequel and they succeed for the most part. What makes this fourteenth entry work is that they manage to keep Big G a ‘good guy’ while at the same time dropping the silly ‘save the earth’/’give a hoot don’t pollute’ cheesiness and introducing one of his most badass villains to date… Mechagodzilla!

The plot revolves around an evil race of aliens that want to conquer the world – IMAGINE THAT! The aliens release their version of ‘Godzilla’ but all doesn’t seem right. After a fight with Anguirius it’s revealed that this version of Godzillia is some kind of a terminator. Soon Big G must face his mechanical clone to decide the fate of the world with the aid of a worthless monster named King Caesar.

Mechagodzilla is an evil site to behold but surprisingly this wouldn’t be the first time Toho toyed with the idea. In “King Escapes” Kong faced a robo version of himself and this is just the Godzilla counterpart to it. Mechagodzilla however has a few more toys up his sleeve, including missiles that seem to emerge from every orifice of his metal exterior and the ability to spin his head to shoot behind and front simultaneously and even create force field. Though Mechagodzilla is mega bad ass, the other new monster to the plot isn’t which is some giant lion god that only awakens when sung too…and it’s a long damn song to boot! I’m not kidding as this sequence of this bitch singing to the monster goes on forever, and once King Caesar awakens he gets his ass kicked by my Mechagodzilla within just a few minutes.

The evil alien plot by this point is getting just a tad old, but at least it’s not as lame as the cockroach aliens from “Godzilla vs. Gigan”. These aliens are actually space apes and they revert to their mangled ape form whenever they’re injured or killed, which makes for some fun, cheesy special effects.

“Godzilla vs. Mechagodzilla” finally has the franchise find its footing again and director Jun Fukuda finally proves he can direct a solid sequel after heading four lesser sequels prior. The evil alien plot offers nothing new for fans but the lack of stock footage which plagued previous films and the addition of Mechagodzilla make this a fun entry into the franchise that falls just shy of the solid sequels that came in the early 60s. “Godzilla vs. Mechagodzilla” proved to be so successful that it would be followed by a direct sequel cementing Mechagodzilla’s stature as a legendary Godzilla villain.

Godzilla will return in "Terror of Mechagodzilla"