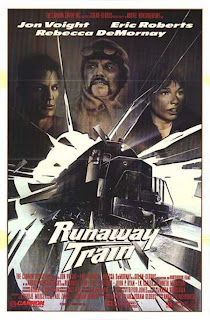 
After watching the typical Hollywood puke “Unstoppable” with my wife I decided to revisit one of my all time favorite films with a similar plot entitled “Runaway Train”. Unlike 'that other film', “Runaway Train” has artistic merit within its thinly disguised disaster plot. It’s cold, grim, depressing and superb… all ingredients for a film to be a critical success and at the same time a huge box office bomb.

“Runaway Train” at its heart is a peculiar amalgamation of talented filmmakers from all around the world. First we have award winning Japanese filmmaker Akira Kurosawa (Seven Samurai) penning the script brought to life by Russian visionary director Andrey Konchalovskiy. All this is financed by Israeli B-movie moguls Menahem Golan and Yoram Globus under their Cannon films logo. How the hell did this multi-national triumvirate come together and not be a disaster? I’m not sure but did it ever turn out grand! 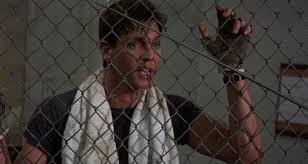 The plot at first glance looks simple… it’s about two prisoners that escape an Alaskan Maximum Security prison and hitch a ride on a train to freedom. The problem is the engineer has a heart attack leaving the train careening out of control. 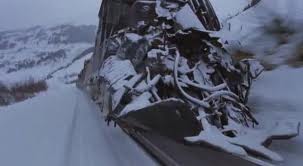 Sounds like a typical disaster film doesn’t it? It's not. This is anything but a disaster film. This is a grand character study drama draped over by its disaster plot. Instead of focusing of the problem at hand, the film focuses on it’s extremely flawed characters who are cast perfectly. 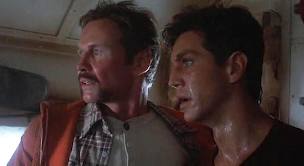 Our two escaped prisoners are portrayed by Jon Voight and Eric Roberts…. Both superb. Manny (Voight) is a wild eyed, dark hearted soul that is deeply respected by his fellow inmates. I won’t lie as his character is unlikeable but Voight’s intense performance draws you into this deeply flawed character’s world. If his ramblings don’t get the viewer on the edge of their seat then the viewer doesn’t respect good acting. Voight’s unforgettable portrayal earned him a Golden Globe and an Oscar nomination, an award he should have won. 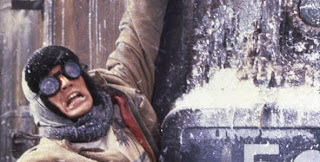 Roberts is also fantastic as the dim-witted boxer that follows behind Voight like an annoying puppy dog. His performance here proves that he is one of the most underrated actors of all time… no I really mean it. He is absolutely fantastic and his performance also earned him a Golden Globe nomination. To top it off the supporting cast also really shines, headed by Rebecca De Mornay as a railroad worker trapped on the train with the inmates and John P. Ryan as the sadistic warden willing to do anything to capture his inmates. The train itself even takes on a character persona, even a face after it crashes into a caboose of another train. One can’t help but get goosebumps as it charges head-on, growling like a ferocious beast into boarded up train tunnels along an abandoned track for derailment.

Since the location of the film takes place up in the cold, grim Northern region, the producers must have asked themselves who would know cold and grim the best. The answer is of course a Russian hence Andrey Konchalovskiy was the picture perfect choice as he captures the cold and loneliness of the snow-covered wasteland wonderfully, really adding to the brooding atmosphere of the film. He also is able to marvelously intercut our two parallel plot lines of our victims on the train as well as the people at headquarters trying to help them by balancing out the drama, action and suspense to near perfection. 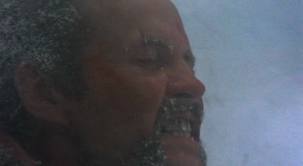 I don’t give very many films the honor of having 5 stars but “Runaway Train” deserves every damn one. There isn’t an aspect of this film I can rag on. The visionary directing, the moving performances, the atmospherically grim landscape, the deep underlying meanings on humanity, the emotional score and the picture perfect ending makes this a depressing albeit a rewarding film experience. Strip this film of all that praise and you’re left with “Unstoppable”. “Runaway Train” has always been and always will be one of my all time favorite films and it’s due time this criminally underrated gem deserves to be dug up and repolished.

Written By Eric Reifschneider
Posted by Cronosmantas at 8:48 PM