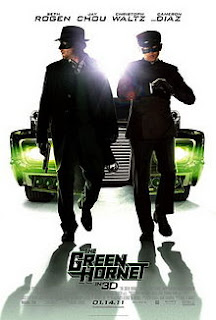 With the slew of superhero films hitting us recently (and more or less to some pretty high standards any more), it was only a matter of time before one hit us as a misstep. Granted, I was never a big Green Hornet fan to begin with so let that be known, but this comedic/action film just simply never makes the cut with its oddly placed and over the top ridiculousness and semi-childish humor. It's a fun film that makes light of itself more often than not and does contain some charming ideas, but it never knows where it stands or how to proceed and the film ends up just treading water, never going anywhere.

Britt (Rogen) has had a rather purposeless life thus far. His father is a media mongol who runs The Daily Sentinel and his life is filled with luxurious wasted time. When his father passes from an allergic reaction to a bee sting (I'm sure you can fill in the blanks already), Britt decides to finally take the reigns in life. Using his wealth and oddly heroic sense of kicking ass and taking names, he partners up with Kato (Chou) a well armed super intelligent mechanic and martial arts expert, to start taking down crime as The Green Hornet. Unbeknownst to him though, he stumbles on a larger conspiracy that may trace all the way back to his father.

Rumors of a "Green Hornet" film have been swirling back and forth for decades. So when they finally got the balls enough to make it, its hard not to be somewhat disappointed with some of their choices. I understand that the concept is kind of cheesy and that modernizing it would be tough, but playing it off as mostly a comedic film seemed to undermine the experience. Despite trying to add dramatic bits here in there to balance off the Rogen cliche humor bits, the film fails to really grasp onto some of the bigger things it needed to latch onto to work. The humor/drama ratio is off. Then throw in some very stylized action sequences (with a random 'thought-in-the-moment-highlight-for-the-audience-particular-items-like-guns-and-objects-to-look-for-in-the-fight-sequence' that never works) and the film bounces around genres like the ADD people that seemingly wrote the script. It has a good pacing and still rocks occasionally, but the film just crumbles under a more scrutinizing eye.

The film also, believe it or not, suffers from Seth Rogen as the lead. Don't get me wrong, Rogen can be VERY funny at times, but casting him as the Green Hornet is like casting Adam Sandler as The Flash. It's a combination that might seem funnier on paper (funny, considering Rogen co-wrote it), but comes off as awkward on film. Not to mention the script caters to his random quip banter style of humor, which can be funny at times, but seems irritatingly childish too. For a PG-13 film, he sure does say shit and crap a lot. And makes gay sex references haphazardly way too much. It's just awkward.

In all honesty, the one thing I really loved about the film was Jay Chou as Kato. Although my heart was set on the announced Stephen Chow (you know, the awesome comedic/kung fu actor from "Kung Fu Hustle" and "Shaolin Soccer"?), but when he left Chou was a great replacement. His fun little homages to Bruce Lee and ability to blend humor into his rather serious demenour made the film for me and was worth watching. Watching him do the ridiculous stunts and fighting was fun. It's a wonder this guy was a mega-pop artist before films.

"The Green Hornet" just comes off as a rather blustery superhero film that never makes the cut for any of the genres it tries to utilize in its overly long script. It has some great action sequences with some great car stunts, but its story is lack luster, cliche, and the Rogen can be down right irritating with his non stop quips. Luckily Chou makes up for some of the chemistry on screen and is the highlight of the film. "The Green Hornet" is worth the rental, but I'll be waiting to buy this one in the cheapy bin at Wal-Mart in about a year and a half.

BONUS RANT: Also, Christoph Waltz is seriously underused as the villain. The potential for this arrogantly humorous crime lord who changes his name to Bloodnofsky to be more super villain like is primed for the picking... and the film fails to do so...ever. A hero is only as good as it's villain and the underdeveloped and rather awkward misuse of Waltz is just partnered with the awkwardness of the Hornet. Sigh.