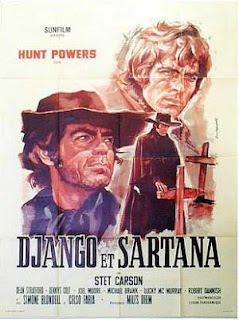 Two of the most popular spaghetti western characters come head to head in one film! This is a euro film fanatics wet dream! This is the biggest cinematic crossover since "Frankenstein Meets the Wolf Man". Wait... are you telling me this is an unofficial sequel to both franchises? To top it off its directed by Demofilo Fidani, nicknamed the 'Ed Wood' of Spaghetti Westerns. Yea I'm afraid this is going to suck...

Well a stranger comes waltzing into a town without a sheriff, takes up the job and with the aid of another stranger decides to take on a local gang.

Director Demofilo Fidani (hiding under the pseudonym Miles Deem) was known for making spaghetti westerns faster and cheaper than anyone else. This process also ensured his products would also be far worse than his counterparts. I'm talking about non-existent production values, poor camera work (including constant shaking and awkward zooms), cookie cutter plot, blatant continuity errors, and obtrusive musical cues that abruptly cut out. All around just rotten filmmaking. There are a few atmospheric windy shootouts towards the end but that's about it.

The cast is good with genre heavy weights Fabio Testi and Hunt Powers cast in the our title leads. However thanks to Fidani's nonexistent direction and plot there are not given much to do. Come on Fidani! If you're going to go to the trouble of making of film cashing in the Django and Sartana names then give them something to do that's MEMORABLE! Fidani allows Power's Django character to dress and look like the famous character Franco Nero popularized in "Django" but other than that his character acts completely different. Don't even get me started on the Sartana character. Testi plays Sartana... but it's not even revealed to be that character until the very end. Up until the end one would never expect it as this character is as FAR from Sartana as one can get.

Even though this is an unofficial follow-up to both the Django and Sartana spaghetti western franchises, director Demofilo Fidani could have still had fun with the ridiculous cross-over by giving audiences something fun and memorable, even over-the-top but he fails miserably. Both characters are completely different if not near so to their previous film incarnations and are not given much to do in the lame, cookie cutter plot. It may not be Fidani's worst film I've seen but "Django Meets Sartana" gets the dubious honor of being one of the worst spaghetti westerns that I have witnessed that's for sure... which is a damn shame when looking at the promising title.

Written By Eric Reifschneider
Posted by Cronosmantas at 1:46 PM