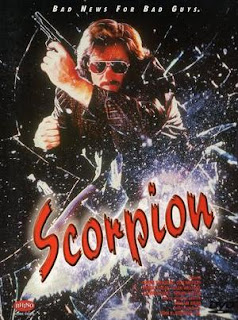 I originally bought "Scorpion" used from a mom and pop video store when I was in high school but the tape was unwatchable due to being wore out and damaged. After all these years and finally being able to sit down and watch the entire film I find it hard to believe that it was actually rented enough to be wore out. Perhaps it was an unlucky renter who wanted to ruin the tape on purpose in order to save unlucky future viewers from witnessing this monstrosity.

Well we get a special agent code named "Scorpion" who drives around Mexico in a Porche beating up jackasses in local bars. Well he finally gets an assignment to enter an airplane that has been taken over by middle eastern terrorists (he enters the plane in Jockey shorts no less... barf). Now he gets assigned to protect a middle eastern terrorist with vital information but his best buddy bits the big one so he takes it on himself to solve the plot blinded by vengeance.

The title character is played by nobody Tonny Tulleners who was advertised on the original VHS box art as a kickboxer who originally fought Chuck Norris professionally. Speaking of Chuck Norris, Tulleners tries extremely hard to mimic his former foe to no avail. He grows a big, manly 80s 'stach to be even more Norris-like. Sadly he lacks the charm, wit, martial arts ability and overall likability of his rival. Hell Tullener's voice is even annoying!

The whole film is filmed unskillfully in the hands of director William Riead. This guy directed a shit ton of made for TV film making documentaries throughout the decade with "Scorpion" being his first 'professional' film. Guess what? He gives "Scorpion" and extremely dull, made for TV documentary look. He can't even film a good martial arts sequences properly.

The original poster artwork with our hero jumping through a pane of glass made this look like an entertaining piece of 80s action cheese but it's an all out lie. The film is boring and drab in the hands of a documentary film director and Tonny Tulleners is completely uninteresting as an action hero. "Scorpion" proved to be his one and only foray into the action film world and I guarantee no one will shed a tear over the matter. Do yourself a favor... rent any Chuck Norris action film instead of this boring drek.

Written By Eric Reifschneider
Posted by Cronosmantas at 10:36 AM