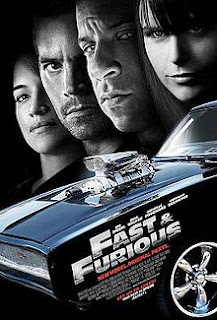 Although the critical response to this fourth entry into "The Fast And The Furious" franchise was relatively negative, its hard not to have some enjoyment in this film. Is it rocket science? Not at all. It's not even as dramatic as the original one was in terms of legit film script foundations, but the film seemingly knows exactly what it is and plays it up. To this effect, this makes "Fast & Furious" the best of the series as it does make any pretensions of what it wants to be.

Dom (Diesel) has left his comrades in arms behind him. Letting go of his long time love Letty (Rodriguez) was the hardest, but the heat was on him and it was best to get them out of harm's way. When he hears word that Letty has been murdered by a drug runner in L.A., Dom takes it under his own guise to track down her killer and bring a bit of vengeance on their head. Turns out his old frenemy Brian (Walker) is also tracking down this drug runner. Now the two may have to put their differences aside to bring a bit of high speed justice down on the road.

Coming as a 'true' sequel to the original film (technically at least the first part of the film takes place before "Tokyo Drift") reuniting the main parts of the original cast, "Fast & Furious" does many things that the other sequels could not. It has a better chemistry with its cast, particular nod to Diesel for another subtle, basic, but rather intriguing performance who brings the charm, and partnering that with Justin Lin's visual flair and this film actually works better as the action film the series has always wanted to be. When the film rocks it, it certainly does that and the car chases and action sequences really work well. It's nice to see a film with the charm of the first that actually has great car stunts (thanks Justin Lin!). Although his use of CGI is a bit underwhelming in the end, with notes taken on the rather odd looking gas trailer roll in the opening hijack sequence and the cartoonish "Speed Racer" look of the tunnel chases, the adrenaline runs high and the action is pretty awesome. Do shotguns blow cars straight up into the air? Hell, they do here!

The series still lacks a bit of that dramatic tension it has desperately clawed for since film one. This time, it does the smart thing and minimizes the plot to a complicated grind house plot. Vengeance? Cops and drug runners? Let's go with it. It still fails to really build the emotional relevance that it touches on and it hurts the film overall. The tension between Walker and Diesel needed to be a bit thicker so the eventual man bonding would have paid off. As with all of the films, "Fast & Furious" doesn't quite make it on the emotional levels.

Despite its flaws (which there is still quite a few), "Fast & Furious" ignites a tank full of entertainment for the viewers. The car chases are fun and full fledge action sequences and there is a charm to its simplistic and borderline B-movie plot that works. There is still room for the franchise to grow (let's see how "Fast Five" plays out) but this one definitely marks it as a high point. Not great, but they are getting there.

Written By Matt Reifschneider
Posted by DarkReif at 1:35 PM