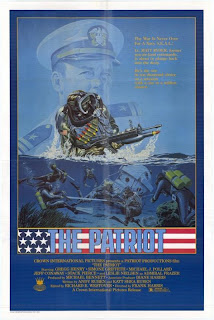 Over a decade before Mel Gibson and Steven Segal portrayed a 'Patriot' in their separate and totally unrelated films there was Gregg Henry. Never heard of him? Well he is actually a really underrated actor that has appeared in dozens of great movies.... but sadly "The Patriot" isn't one of them. Hey, what can you expect from the director who gave us such unwatchable action junk like "Killpoint" and "Low Blow".

Well we get some jackasses steal a nuclear warhead and a salvage crew member notices that her boss is up to some sneaky shit after finding a nuclear radiation sticker. She approaches her old friend, our patriot, with her information and he takes it upon himself to do some investigating which in turn gets his friend killed. In comes the Navy who gives our 'patriot' an offer he can't refuse, a reinstatement into the military with his dishonorable discharge to honorable if he can catch the terrorists. The result is a few by-the-number action scenes that action fans have seen time and time before and better.

Compared to director Frank Harris's previous two films I've had the displeasure to witness, "The Patriot" comes about being a step better... but not by much. The production values are a hair better and his handling of the camera has improved a bit but overall the direction is still piss poor.

What also helps this film rise above Harris's previous films is the cast as we actually get good actors for a change. Sure there are a handful of the directors stock actors that reappear but casting Gregg Henry in the lead role helps tremendously. This guy is seriously underrated and it's great to finally see him get an actual main starring role but sadly it had to be such drivel like this. Hell we even get a short appearance by the late great Leslie Nielsen as an admiral.

The cast may be better but director Fank Harris proves yet again how inept his behind the camera. With an actual director with talent this could have been an action film worth hunting down but as is it's just another forgettable C-grade 80s action film. Underrated actors like Gregg Henry deserve so much better than rubbish like "The Patriot".

Written By Eric Reifschneider
Posted by Cronosmantas at 7:47 PM