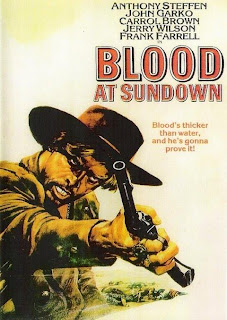 "Blood at Sundown" is popular with the Spaghetti Western crowd today as it was the film that gave birth to the name Sartana. Yes the name would be later reused in the popular Sartana pentology but this is so much more than only a film that gave us a popular name. It is an atmospheric, brooding western about brotherly rivalry that deserves to be seen by fans of the genre.

Anthony Steffen plays a brother recently released from a 10 year stint in prison, serving time for a murder he didn't commit. Upon being let out he finds that his brother Sartana (Gianni Garko) has taken his women and has become a high class criminal that rackets big bucks from local towns for protection. Steffen doesn't take kindly to this and with no support from his psychotic mother (who sides with Sartana), he takes the law into his own hands to wreak vengeance on the brother that has ruined his life.

The real draw to this western is the cast consisting of Anthony Steffen and Gianni Garko, two of the biggest heavy weights in the Spaghetti Western genre. Steffen is wonderful in his typical strong, silent antihero role and Garko plays against type here as an eccentric villain. I'm used to seeing Garko play heroes and wealthy businessmen so seeing him play a rugged, borderline psychotic was rather refreshing and proves his versatile as an actor.

Director Alberto Cardone wonderfully gives this Western a dirt blasted, atmospheric feel to go along with it's almost Shakespearian brotherly hatred plot. I loved the look that Cardone gave the film and it's a damn shame he didn't direct more films as his filmography is far too short. The score by Michele Lacerenza is also fantastic and it should be as he aided Ennio Morricone in his marvelous scores for "Fistful of Dollars" and "The Good, the Bad and the Ugly." Like the director it's a damn shame this guy didn't provide more wonderful scores for more films.

Typical with Spaghetti Westerns there are numerous flaws. We get some bad dubbing, some awkward dialogue translation and even some jumpy editing. Fans of the genre are used to these flaws so they don't hinder the film too much.

"Blood at Sundown" is so much more than the film that introduced us to the name "Sartana." It's a damn fine western in its own right and the greatest crime is that there isn't a proper DVD release of this film. It is packaged in a set called "Sartana: The Complete Saga" but the transfer is of a beat up VHS source. With its powerhouse cast, mesmerizing score and stylistic direction this film deserves to have a proper DVD treatment sometime in the future.

Written By Eric Reifschneider
Posted by Cronosmantas at 11:05 AM