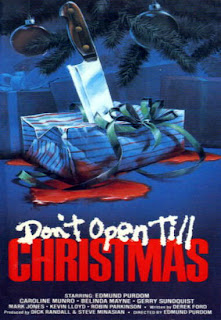 1984 was a tremendous year for Christmas time slashers as we were graced with both "Silent Night, Deadly Night" and to a lesser extent "Don't Open Till Christmas." "Silent Night" shocked the nation with it's portrayal of killer dressed as Santa brutally butchering people. "Don't Open" didn't shock the nation as a killer is brutally butchering people that are dressed as Santa. What the hell? This is from the makers of "Pieces", perhaps the most brutal slasher of all time yet this yule tide slasher didn't even get noticed? Apparently a Santa killer is a NO NO but a killer killing Santas is acceptable. That's just as about two faced as Wal-Mart refusing to carry unedited versions of CDs yet carrying the 3 disc unrated version of "Caligula". In other words it makes no fucking sense!

Another reason that this British slasher didn't shake the foundations like it's brother in crime as it was released under the radar due to many, many production quandaries. The first major problem is that our director and main star Edmund Purdom left the film half way through due to disagreements with the producers. The rest of the film was finished by the editor and producer. That's three different directors! Due to Purdom being the main star the rest of the film had to be re-written to explain his absence. This of course makes the film an incomprehensible mess of bloody shit.

The plot is simple enough with a killer stalking people dressed as Santa but all the re-writes even makes this simple plot almost impossible to follow. Certain characters that are written in to be major contributors to the plot (like the photographer) just simply disappear with no explanation. Other characters disappear with lame explanations like our main detective (the director that walked off) just simply being suspended off screen no less. Many important scenes that should have been filmed are also left up to our secondary characters to tell the audience what the fuck is going on by boring dialogue.

Other than the mess of a plot, slasher fans that like their films sleazy will get a major Christmas present with this one. This is every bit as sleazy as "Silent Night, Deadly Night" perhaps even more so. Lots and lots of female flesh is present. All the Santa Clause characters are also sleazy drunks with most stumbling around and/or going to porno stores. Trust me all these slobs are human ashtrays and deserve to get offed. They are also incredibly fucking stupid because if there is a killer butchering people dressed as Santa wouldn't you think they would, I don't know, quit their job? FUCK!

The production troubles not only fucked up the plot but also makes the editing look like it was hacked by a psychotic Santa. All the extreme gore sequences look like they were added in as an afterthought in order to compete with other gory slashers at the time. The score also seems like it was recorded before the film was finished as it really doesn't' fit with certain sequences, like dialogue scenes with music more suited for a stalking sequence.

With schlock producer Dick Randall, the man responsible for the unapologetic and guiltily pleasure slasher "Pieces", this should have been just as much a guilty pleasure as its rival "Silent Night, Deadly Night" but thanks to all the production problems we get a pieced together film that has terrible plot flow. Saying this film is a mess is an understatement but it's worth a look for slasher fans that prefer to their films with sleaze and bloody violence.

Written By Eric Reifschneider
Posted by Cronosmantas at 10:29 AM