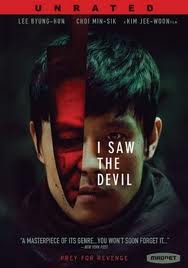 My anticipation level for "I Saw The Devil" was pretty high. Kim Ji-woon has easily become one of the most interesting and rightly praised directors in the world of film and his movies like "A Tale Of Two Sisters" and "The Good, The Bad, The Weird" have earned him a place of prestige here at Blood Brothers. His latest blood wrought thriller, "I Saw The Devil", easily ranks up with the previous mentioned films in its expert execution in front of and behind the camera.

Soo-hyun (Lee Byung-hun) is a special forces trained officer who has just received some very devastating news. His fiance (pregnant with a child nonetheless) has just been found brutally slain by a serial killer (Choi Min-sik). With a vow of vengeance, determination unbound, and his training he begins to stalk and hunt the killer down relentlessly. As their tales begin to interweave spiraling them both into hellish circumstances, Soo-hyun begins to find himself becoming a monster as despicable as the one he is chasing.

As odd enough as it is, despite a script with obvious flaws that fails to be quite as impactful as one could hope (it still hits you once or twice in the guy emotionally), Kim Ji-woon's directing and the vary talented work of our two leads and their supporting casts, carries this film further than it probably should have gone. Without their charm as an ensemble, this film might have just been another cliche thriller landing in my queue. The story is good, but without the stellar cast and director, it would not have been near as good as it is.

This of course, leaves a rather basic thriller strictly in the hands of its makers. A special mention must be made to the two leads, who handedly carry this film and give it so much more meaning then it would have without their great on screen efforts. Lee Byung-hun from "The Good, The Bad, The Weird" gives a riveting performance as our hell-bound hero. Although sometimes it was a bit too subtle than one would hope for initially, his off as a character in the final moments make his journey one of incredible tragedy. Partnered with this is a bat shit and diabolically motivated performance from Choi Min-sik (of "Oldboy" fame) whose striking screen presence more than makes for a memorable and creepy villain.

Kim Ji-woon handles the script with perfect finesse as he balances out the dramatic tension to the surface of an otherwise brutally violent thriller. A stellar cast and more than able vision for a rather mundane script makes "I Saw The Devil" another amazing film out of South Korea. Right now, these guys just know great film making and this is another prime example of it. A must see.

Written By Matt Reifschneider
Posted by DarkReif at 12:05 AM