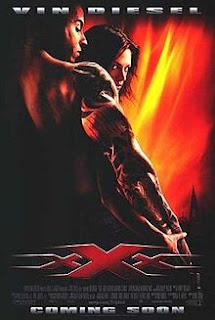 "Welcome to the Xander zone!"

Xander (Diesel) also known as 'X' is always doing the most insane stunts. He has his own internet release for all of his stunts where he stupidly does 'X game' (oh my God, there's a trend running here) style stunts like parachuting out of a stolen car as it plummits off an insanely high bridge. His nose for analyzing situations through the adrenaline just so happens to make him a target for NSA to recruit to become a secret agent. After being forced to test for this position (by being left in the middle of a drug raid in a foreign country no less), he finds himself stuck in the middle of a conspiracy lead by the secretive Anarchy 99 society which just may...da da dum! END THE WORLD!

The plot's absurd. The dialogue is horrid and even Vin Diesel's strong screen presence can't necessarily save it from sinking lower and lower into unintentional hilarity. Rob Cohen seems to embrace the action portion of the film so fervently that he forgets to add substance to style for his directing. It's like the good idea of crafting a new franchise to be a young America's new spy hero is too much of a struggle for any one in this film to handle without going insane with the concept, but not being able to express it.

Written By Matt Reifschneider
Posted by DarkReif at 1:56 PM