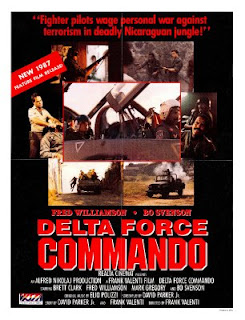 Look at that title! This is the unholy amalgamation of Arnold Schwarzenegger's "Commando" and Chuck Norris' "The Delta Force". What does that mean? Well it means this is going to be the action event of the decade! What.. hold on... I'm getting myself too amped up. Let's just take a look at the credits real quick. Pierluigi Ciriaci is credited as director... the same guy who directed such 'well-known' films as "Warbus II". It stars Brett Baxster Clark of such films as "Eye of the Eagle" and "Cobra Mission 2". Fuck... this is a late 80s Macaroni Combat film. Damn... I guess this means it's going to suck.

Some terrorists break into an American military base to steal a nuclear bomb and kill Brett Baxter Clark's pregnant wife (why are soldier family quarters located so close to where nuclear missiles are stored is beyond me) . He heads out for revenge by kidnapping pilot Fred Williamson to fly him into enemy territory and then fires lots and lots of bullets in the name of honor and revenge.

Being a late 80s Italian Macaroni Combat film we can expect the usual: bad acting, bad plot, bad stunts, bad dialogue, bad directing... yea everything is plain and simple BAD. Fuck this film is even loaded with lots of mistakes and continuity errors. If I didn't feel I would have to drink to make it through this mess again one might find it fun to go through and play 'spot the mistake.'

Besides Bret what's-his-name, two other cult icons make up the cast. That of course is Fred Williamson as the pilot and Bo Svenson as the leader of the Delta Force. Williamson does minimal... even his ego feeding persona fails to shine through here. Svenson is typically wasted. Oh, I forgot to mention this also stars Mark fucking Gregory, the non-actor from such classics as "1990: The Bronx Warriors", "Thunder Warrior" and of course "Warbus II", as the terrorist leader. Thank the Italian war gods that the filmmakers made his character mostly mute to save our eardrums from his deplorable mumbling.

My real beef with the plot is the Delta Force aspect which is completely pointless. Our Delta Force shows up for a short time at the beginning of the film but Svenson is told they can't move in. They then don't enter the plot until the very end to help rescue our heroes. Why the fuck even have the Delta Force in the film if they aren't going to utilize them?

This is atrocious but one should expect this as all late 80s Italian Macaroni Combat films suck. Somehow this film did well enough to warrant a sequel as "Delta Force Commando II: Priority Red One" followed two years later. A sequel shouldn't surprise me as both "Cobra Mission" and "Warbus" also somehow managed to inspire sequels so anything can happen in the 'wonderful' world of late 80s Macaroni Combat.

Written By Eric Reifschneider
Posted by Cronosmantas at 4:04 PM