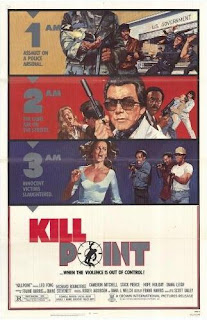 In the 80s there was plenty of B-grade action films mostly courteous of my favorite production company Cannon films. Even with lower production values and heightened cheesiness these films had endless entertainment value. There were also plenty of C-grade action movies that infected video store shelves which gave us even lower production values, poorer filmmaking quality and overall nearly no entertainment value. "Killpoint" is one of these C-grade entries.

We open with a guy robbing a National Guard armory in the goal of selling the weapons to street gangs of Los Angeles. FBI Agent Bill Bryant (Richard Roundtree) and L.A. Cop Lt. James Long (Leo Fong) team up to take them down.

The production values are less than shoe-string and it shows with all around poor filmmaking. Director Frank Harris just plain and simple doesn't know how to direct a film. Even the martial arts sequences are beyond awful and poorly choreographed.

The cast however is delightful but let's be honest these guys are on the downward spiral of their career. First of all we get Richard "Shaft" Roundtree playing his stock suited cop character. Cameron Mitchell steals the show however as our eccentric gun dealer. I've always liked Mitchell all the way from his early Spaghetti Westerns all the way through his foray into exploitation and B-movies of the 70s and 80s. He is the ONLY thing that makes this film watchable as his quirkiness shines through. Scenes where he kills someone in cold blood followed by a scene where he's sitting in a hot tub with flowers in his hair got me to chuckle.

Our main star Leo Fong is the real humdinger. Apparently this actor did a few ninja films before teaming up with director Frank Harris to make a few nearly unwatchable action efforts but there really isn't anything remotely interesting about this guy. He's pushing sixty, his martial arts abilities are lacking and, not to sound necessarily mean, but he's incredibly hard to look at, especially the close-ups during his training montage.

The only thing that kept my attention during the entire running time is for the fact this is rather violent with plenty of pointless killing sprees as gangs gun down innocent people in various locations. The film tries to give motive behind the killings but I don't buy it, it's just pointless. The violence also seems heavily cut to garner it's R rating.

"Killpoint" is a dire C-grade action effort that's so repugnant in its filmmaking approach that it can be hard to watch at times. The only aspect to keep viewers interested is the eccentric performance of Cameron Mitchell and some violent action sequences but there are much, MUCH better cheesy action films lining your local video store shelves.

Written By Eric Reifschneider
Posted by Cronosmantas at 8:46 PM