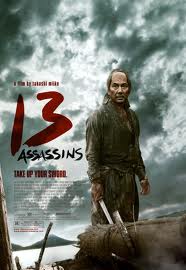 "Take Up Your Sword."

Takashi Miike is the chameleon of directors. The guy not only has a stunning output of films (in 2001/2002 he put out 15 separate projects, for example), but the range of these films is just as ridiculous. Everything from the dramatic horror of "Audition" to kid's films to "Sukiyaki Western Django". The man does it all, which is the reason that his remake of "13 Assassins" was so high on my list to see. He proved he can do samurai films previously, but could he craft the ultimate one?

Lord Naritsugu is a cruel politician in Feudal Japan. His lust for blood and women has created a rift between him and his half brother, the Shogun. Not looking to lose face in a nation that has been peaceful for some time now, the skills of Shinzaemon (Koji Yakusho), a previously feared samurai who now spends most of his time fishing, is asked to assassinate the half brother. Shinzaemon builds a team of skilled samurai, ronin, and a tracker to set a trap for the politician before his connections become too powerful to touch him.

To be quite frank, I've never seen the original film this is based on. Judging from the sheer power and grace of "13 Assassins" though, the original has to be good, because "13 Assassins" is a slow burning character driven epic journey into the days of the samurai. The first two thirds of this film are spent giving us a sense of the burden that these honorable men hold on their shoulders even in a time of peace. Even though there is only a little time spent on each of our team members and the various 'villains' of the film, there is a distinct character to each that is achieved through a fantastic script and some of the best acting I've seen thus far this year. The plot treads along at a brisk pace (although it's simple, to give us all the information we need to actually cheer for their cause takes some time so it has to move quickly). This portion of the film seems talky and atmosphere driven, but it's well built and a stark difference to the last part of "13 Assassins".

The final third of the film is goddamn epic. The assassination of the politician is built on the idea of these 13 well skilled men going against an army of over 200 in a village built on traps, explosives, arrows, blood, mud, and so many shiny sharp swords that one has to let their jaw drop at the sheer magnitude of the sequence. Modern directors take note: with a solid set piece, great stunt work, acting, and a solid sense of pacing...you don't need CGI to make action pieces epic. The blood rains down in drenches as the body count soars and the awesomely staged choreographed fight sets and explosions destroy the atmosphere in the first two thirds with a bang. This final throw down (which has to clock in at 40 to 45 minutes, I swear) is simply awe inspiring.

Miike did it again. The man knows how a film works and he cooks "13 Assassins" to a perfect combination of history lesson, dramatic redemption, horror (it is a Miike film so expect some very disturbing moments), and the sword fighting epic. Although the film may throw off some of the newer audiences with its slow build, it's completely worth the watch as it effortlessly displays this riveting tale.

Written By Matt Reifschneider
Posted by DarkReif at 7:21 AM