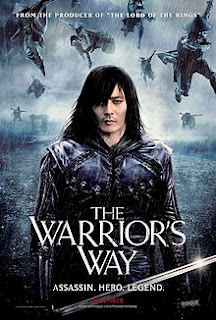 Another cowboys and ninjas film? Oh hell, despite the idea running a bit thin lately, might as well catch a gander at this American version of the concept right? Unlike some of its peers though, "The Warrior's Way" is one of those films that loses itself in the swirling visual style and epic flare of its concept. I've used this phrase before (oh so many many times), but "The Warrior's Way" is all about style above substance. This is quite unsettling as the film held a lot of potential with its plot and characters, but most of it is forgotten in its Anime inspired romp through fairy tale land. Not quite what one expects with the high standards set by "Sukiyaki Western Django" and "The Good, The Bad, The Weird".

Yang (Dong-gun Jang) is the world's most badass assassin and swordsman. He moves with lightning speeds and cuts with the strength to decapitate a man in one fluid motion. In a weird twist of fate though, he fails to kill the baby girl of his rival clan and takes her into his care, betraying his own, and fleeing his land. He ends up in the wild west searching for an old friend and finds himself trying to start a new life in a town of circus folk. There he finds a young girl (Bosworth) who catches his eye and for a brief moment sees a future without death. Too bad both of them have pasts ready to kill them. These pasts are catching up. Now its up to Yang to decide who he really is and whether or not he can let the deeds done finally go.

I really, really, really want to love this movie. The plot has some much great potential. The character Yang might be a bit cliche (assassin with a heart tries to move on....how many times have we seen that one?), but Jang plays it subtly with tons of heart so it works to point. The plot combining the east and west motifs is an interesting one with two past riddled people who's worlds collide. This builds to a potentially great show down of bandits and ninjas at the end. This film could have had a lot going for it.

It never gets there. It brushes through all the great moments at high speed turns, pushing through the character arcs and plot depth to get to the next cool sequence rather than letting it build and work the story and action together. In this sense, the action can be very cool. There are tons of fantastic shots here, although there is way too much CGI going on, with the sword play and stunning comic book settings and visuals. The film feels like a live action anime more often than not actually. The director loves to use slow motion a bit too much to add to the epic-ness of the fights (must have decided "300" was the be all end all of badass movies to be his inspiration), but it still creates some memorable looking concepts executed out. The final show down of ninjas and bandits does entertain I have to admit, but in the end "The Warrior's Way" comes out as a film so focused on this that it forgets it has a pretty good tale to tell. Thusly we are left nonchalant about our heroes and their plight as long as a lot of ass gets kicked. Which it does.

"The Warrior's Way" is disappointing in missing its mark. The potential for a great film is buried in the lavish CGI back drops and slow motion sword slashing. If only the focus would have been more refined for the actors, writing, and directing. This film could have not only kicked ass action wise, but had the depth to found its ridiculousness. As is, the film might find its cult audience with time, but fails to really impress at this time.

Written By Matt Reifschneider
Posted by DarkReif at 11:35 PM