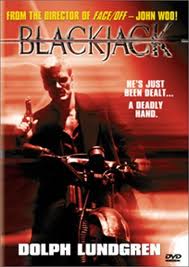 For this John Woo fan, every day couldn't be greener grass and bigger bullets I suppose. That's how I felt when my brother let me watch his crappy DVD copy of the very forgetful film "Blackjack". Even when John Woo does bad movies (which he does a lot), his talent for charm and action usually make up for their gaping plot holes, horrid dialogue, and poor acting. Not here. Oh no. Not on "Blackjack". This is a mark on Woo's catalog as the film spirals into pools of poor scripting, odd ball moments, and low production values. As a Woo fan, I would have been alright skipping this one to save myself the disappointment.

Jack Devlin (Lundgren) is an ex-Marshall who now lends his talented hands out as a body guard, detective, and all around blow shit up kind of guy - sometimes all three! - and when his latest assignment, protecting an up and coming model from some psycho, seems to get out of hand he is the only guy for the job. With the help of his trusty one eyed butler (Oh yes, he wears a patch) and one of his good friends orphaned daughter who he is now guardian of (Oh yes, tummy aches are priorities now) he must figure out who this snarly baddie is and kill him before shit goes down. Did I mention he has a phobia of the color white?

In all reality, once one realizes that "Blackjack" was originally filmed as an elongated pilot to kick off Lundgren's TV career, things tend to come into focus. Things become clear enough to realize that this concept (which reeks of side characters and unfinished arcs for further episodes) just simply doesn't work as a two hour movie. His phobia of the color white, the weird butler with ties to the mob, the new kid in the house, the weird relationship with his shrink - all feel completely left as poorly developed sub plots. It's obvious that they wanted to flesh this out later on, which would never happen, and it leaves the film feeling like there is a ton of random side crap that just doesn't make sense or matter. Partner this with the extremely low production values (just look at those credits!) and it smells like made for TV shit.

Not to mention that it feels as though John Woo is battling so much of this that he never gets to fully utilize his style here. We occasionally get some of that great action he is known for with some fun camera work, but its rare and brief in its use (the ridiculous car bomb scene has potential but is just full of gaping plot holes to work). Not to mention some of his normally good traits are misused. The jazzy score feels completely out of place and the cool settings for the action sequences seem to pop out of nowhere. Really? A MILK FACILITY? Given more time, money, and maybe effort and I'm sure even Woo could have saved this picture to some degree. He did make Van Damme look like a mullet-ed bad ass.

As is, "Blackjack" pretty much sucks from beginning to end. The story is cliche and when it veers off of its standard ABC's of bad action film, its so random and obviously ripened for TV picking that it ceases to make sense. This is only for die hard Woo fans who want to have everything by the action director great. Otherwise skip it and go get yourself a carton of milk. Never know when you can use it to slip from the leathery grip of a henchmen.

Written By Matt Reifschneider
Posted by DarkReif at 12:02 AM