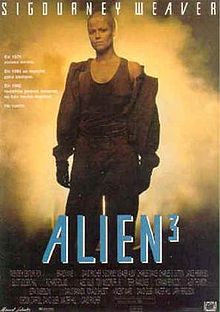 Although fan and critics seem to agree that "Alien 3" was a misstep, it's hard for this reviewer to necessarily write off the film so easily, especially after watching the 30 minute extended cut of the film. Compared to the likes of "Alien" and "Aliens" it's also hard to deny that this third entry is not a step down in quality. Fortunately, the film does have quite a bit going for it despite its structural flaws, making it a film that gets an 'A' for on screen effort, but a 'B' for its foundational work.

Ripley (Weaver) awakes to find herself stranded on a desolate planet in the middle of a high security all male prison/foundry at the ass end of the universe. Hicks and Newt have both been killed when the escape pod crashes into the ocean (cough, cop out, cough) and now Ripley must survive in an environment where she is not wanted by the religious sect of criminals. When an Alien shows up to wreck her pity party, she must deal with scoundrels, the company men on their way to get her, and a new breed of pissed off Xenomorph. Shit just got way more complicated in her trivial life.

Reading about the cluster fuck this film went through as draft after draft after draft of rewrites and different plots failed to make the cut with "Alien 3" is a trivia buffs wet dream. Some of screen writings best had a go at this film before it finally ended up being filmed with an unfinished script. That being said, it's the rather plot hole ridden and oddly structured script that undermines most of the great things this film gets going. Pivotal characters are haphazardly built, killed off, or left with no arc. Essential logic for the direction of the film is left untouched and it disregards where the franchise was heading (the Newt and Hicks debacle for example) with the previous entries. Although it does have some great dialogue at parts, particularly from the religious leader and the staff medical officer, "Alien 3" suffers seriously from its script.

The reason I find "Alien 3" to be rather underrated, is how well it attempts to cope with its foundational errors. Director David Fincher shows a charm for great camera work and capturing the atmosphere of the setting solidly. The acting is once again more than top notch too. Although David Fincher seemed to have a very rough time with this film (just watch the behind the scenes to hear him complain about it), he seems to do his damndest to not let it show on screen. His style behind the camera carries through with the great atmosphere. Even the cast seems to disregard the issues the script presents. Although Ripley is left as a character with a wonky arc of growth here, Weaver ably portrays enough pain and emotion to cover up most of its gaps and we get great supporting roles from Clemens (Dance) and Dillon (Dutton) who steal many of the scenes they are in.

Once again, as with all of my "Alien" franchise reviews, we must discuss our villain of the film. This time our creature of the cold dark yonder comes to us via Ox (in the extended cut) or dog (via the theatrical cut) and returns to the cornered monster looking to nest and eat it's way through the local population. "Alien 3" returns to that atmospheric horror vibe that the original film had going for it instead of the solider like slaughter of the second. It works here with the great setting and the new design for the Alien works. Fincher utilizes it well, letting us see it in the back ground of many scenes in subtle tension before the brutal violence and it's snazzy. Although some of the blue screen shots of the Alien as a thinner more agile creature (along with the CGI) are less than desirable in execution, they work well and build the creature to its final big blow at the end. The Alien point-of-view shots as it runs across ceilings and walls in pursuit of its victims at the end is charming and well crafted that works insanely well.

Although "Alien 3" is significantly flawed in its writing and sometimes overly long play time, it still has many things to enjoy about it. It's pretty well executed for what they were working with and for that this film earns a bit of respect. This third entry can't touch what the first two were, but it's far from the despicable film that many claim it to be.

Written by Matt Reifschneider
Posted by DarkReif at 7:07 PM