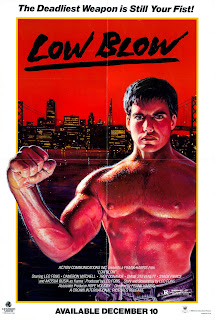 From the director and star of "Killpoint".... that statement proves I'm going to need alcohol going into this C-grade action suckfest. Either that or a loaded pistol and a roll of plastic covering our coach (the plastic is for my wife's sake.)

Leo Fong returns playing a private detective. When he's not being in the right places at the wrong time killing criminals, he's beating the streets of a rural farming community trying to find some rich bastard's daughter who has joined some bizarre cult that only seem to hoe corn fields all day to the might voice of Cameron Mitchell.

Well director Frank Harris actually did it, he made a shittier action film than "Killpoint". "Killpoint" at least had extreme violence throughout and a interesting urban setting unlike this pile of shit. The few action scenes are poorly staged and the overall look of the film looks even cheaper than "Killpoint". If you're looking for a visual stimulating film then you are about to be bored to death. The dialogue isn't any better and I can thank the poor sound production for the score thankfully drowns out the films dialogue.

Leo Fong is as wooden as usual, looking far too old and frail to be starring in such drivel that demands physicality. As for the rest of the cast get ready for some déjà vu as nearly the entire cast of "Killpoint" returns. Cameron Mitchell again makes the film somewhat stomachable with his ridiculous portrayal of the cult leader who spends most of the time lounging in cornfields.

Along with the boring plot there are far too many ridiculous elements to this film that just get my blood boiling. First of all Leo Fong kills tons of guys (even some robbers in a dinner in 'glorious' "Dirty Harry" fashion) yet he never gets questioned by the police. Also what the hell is up with this religious cult? All they do is spend all day hoeing corn fields... I'm not shitting you! The scene that takes the cake however is when Leo Fong crushes a guy's head and it literally crumbles like it's made of ceramic.

Well "Low Blow" lives up to its title as it gives the audience a low blow that are looking for an entertaining time. Sure there a very few scenes that get some unintentional laughs but they are too few and far between to make it worth sitting through this entire inept mess. Do yourself a favor and rent or buy an action film by the Cannon Films production company in order to fill your B-action cravings.

Written By Eric Reifschneider
Posted by Cronosmantas at 5:30 PM