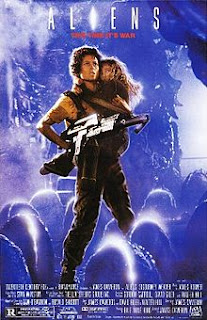 How do you follow up the atmospheric/horror trip of science fiction greatness that is "Alien" for a sequel? Well for one don't do it like the Italians did it with "Alien 2". Turns out what worked was instead of trying to out do the original, take the concept and run with it in another direction. One that is different, bigger, and badder. That's how "Aliens" works and despite the greatness of the first film, this sequel matches it in how good it is, but in many new and different ways.

Ripley (Weaver) is finally rescued. Just a few decades too late. Her story is disregarded as over blown and the company that she once worked for, turns its back on her. When a colony built on the planet where her crew found the alien species suddenly loses contact with the company, she is called back as a consultant to go there with a group of hearty Marines to investigate. What they find on the planet is ten fold the terror she experienced on her ship and it might be up to her to finally find a way to end a potential universe ending spread of these serpentine monsters.

What a ballsy move to take this film in this direction. The sequel focuses down on the action and high octane tension that wasn't really touched on in the first film without losing the details and nuances that made it great. This is what makes "Aliens" a match to its predecessors. It's got amazing pacing with great character work (even more than the original had) and James Cameron snags the tension and overwhelming fear of these creatures (the Facehugger room scene with the kid for example) and smoothly blends it with action sequences and well built story elements. Cameron definitely nails it with this film and it comes off as one of his best works just for its ballsy moves that paid off.

What also helps with "Aliens" is the film's great cast. Weaver returning to the role and handedly embracing its growth lays a great foundation to build on its supporting cast. From Biehn as the heroic and grounded Hicks to Reiser as the smarmy company asshole, the supporting cast is effective and well built. Their chemistry sparks on screen and justifies the terror we feel for their survival and cause. This builds on Cameron's great story and vision nicely.

Then of course, we must mention our title foe one more time. This time the Alien is slightly different, more malicious and warrior like (rather than the stalking animal it was portrayed in the first one) ready to die for the cause of the nest. It matches the overall more aggressive tone of the film beautifully. It also expands the universe by adding in the massive destructive force of the Alien Queen which is a far-too-real built special effect and idea that takes the villain to all new levels. It also leads to a great finale that brings all of the new style to a head and yet still matches the original. It takes what made the Alien so unforgettable and makes it more aggressive. Aggressively unforgettable now.

"Aliens" may have taken the series in a whole new direction, but it succeeds in just as many ways to make it match the original swing for swing as a powerhouse genre film. It's far more action packed and aggressive in its tone and it makes it a film one will watch over and over again. Well done, Mr. Cameron.