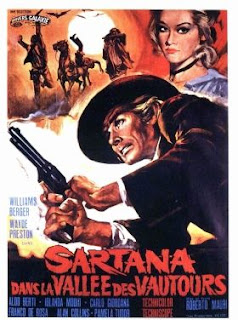 No this isn't one of the enjoyable official sequels to the iconic spaghetti western "If You Meet Sartana... Pray for Your Death." This is actually one of the many knock-offs cashing in on the Sartana name... albeit not a bad knock-off which is saying a lot considering some of the unofficial sequels include such poorly made drivel as "One Damned Day at Dawn... Django Meets Sartana."

William Berger plays Sartana (or Lee Calloway, depends on which of the multiple versions available in the world you get your hands on), a well dressed, sly outlaw who gets a bright idea to break out some prisoners in order for them to take him to some hidden treasure. Surprise surprise they turn on their new host and now Sartana needs to use his noggin to out-wit the bastards and claim the treasure for himself.

William Berger's version of Sartana is extraordinarily different than Gianni Garko's and George Hilton's portrayal in the official series. Sure Berger's character dresses the same but this time around he's a slippery outlaw that uses others in order to benefit his own greediness... very unlike the Sartana we know. It's easy to see that this wasn't originally intended to be a Sartana film due to the character differences. In many versions, including the one I viewed, his character is named Lee Calloway with that name no doubt being the original for the character. The film was also released in some areas as "Ballad of Death Valley" further proving wasn't intended to be a Sartana film.

As for William Berger... I have to say I don't find him strong enough to carry a spaghetti western. He is a wonderful secondary character as he adds a lot of color and quirkiness next to other stronger leads like Lee Van Cleef (See "Sartana" for example). As a leading character... not so much. His character also has a tendency to grate my nerves a bit as he pulls some really dumbass moves. First of all he breaks three guys out of prison demanding 50% of the loot and then is surprised when the three turn on him and try to put his 6 feet under. Seriously... what the fuck?!

The plot flow is also slower compared to other westerns in this wonderful subgenre... but this isn't necessarily a bad thing. The methodical plot flow allows for many characters to be more fleshed out and thus more interesting. Many characters, such as the toy maker and his daughter, would have been just brushed by in other films but thanks to director Roberto Mauri taking his time we get to know these characters and thus care more what horrors occur to them.

One must ignore the "Sartana" in the title to truly enjoy this one. Sure our lead may dress similar but this guy is a far cry from that legendary spaghetti western antihero. If one can get past that and get absorbed into the slower plot flow then they will notice that this euro western has a few extra qualities than many of the other films the genre has to offer.