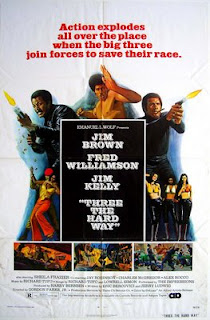 Well we have some rich white bigots (typical of these genre films) who have an evil scheme up there sleeves... they want to release a disease into the water systems of three major cities that will only kill off the black population. Now it's up to three old friends (Brown, Williamson and... errrm... Kelly) to use their wits, firepower and biceps to crush these white bigots and save Brown's girl.

Director Gordon Parks Jr. broke out into the Blaxploitation genre with the hit "Super Fly" and he nails another home runner with "Three the Hard Way." He loads the film up with some great jive dialogue and kick ass senseless action scenes. In other words he makes this loads of fun. The most bizarre yet amusing sequences involves three dominatrixs hired by our three heroes to get a goon to talk and in turn end up killing him with a heart attack. God I loved that!

The cast is the main attraction here as one would expect. Jim Brown and Fred Williamson play their typical blaxploitation hero types: Brown as the strong, silent type and Williamson as the mouthy, cocky smartass. Even Jim Kelly is far more stomachable than in his other outings in the genre, most notably the bloated "Black Belt Jones" and it's despicable sequel "Hot Potato". The acting is below par but no-one ever accused these guys for being good actors.

The plot is definitely out there.... I mean rich white bigots trying to kill off the world's population of blacks with a disease is pretty controversial and would never fly in today's cinema. This is the early seventies and it's all in good Blaxploitation fun so don't take the plot to heart.

The cast is a Blaxploitation fans dream come true and it's a damn shame Brown and Williamson didn't do very many movies together (Forget about Kelly). Sure the acting can be deplorable at times but these are cult, genre films and in this case the bad acting adds to the charm of the film. This may not be Blaxploitation at its most respectable but it sure is one of the most entertaining. You can't tell me a film with martial arts, gun play, tough guy posturing, afros, a comic book tone and a plague killing plot can't be somewhat fun. For mindless entertainment "Three the Hard Way" is worth the price of admission.

Written By Eric Reifschneider
Posted by Cronosmantas at 8:20 PM