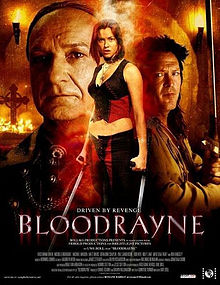 Well. Let's see. Where do I start? Let's talk about "Bloodrayne". It's uh...well...ya see, this film...well...it's...just so incredibly fucking bad. Words cannot aptly describe the crap that emanates from your television screen when it's playing "Bloodrayne". There is just this...void where a film should be. With the cast in this film and the great story based on a killer video game as a leaping point, I mean, how could this film go so absolutely wrong?

Three vampire hunters (including Michael Madsen and Michelle Rodriguez) scour the country side during the Dark Ages to find if there is truth to a myth, that a cross bred vampire/human would help topple the very powerful vampire Kagan (Kingsley). They find their myth in the form of Rayne (Loken), a rather good hearted, but violent half breed being used as a freak in a traveling circus. When she slaughters half of her holders in a blood frenzy, she then takes to the road being chased by both the vampire hunters and the henchmen of Kagan.

Hold on, hold on, hold on. You mean you take the really awesome concept of the video game based in Nazi occupied World War II and you completely change it to a cheesy medieval setting? What?! Then you take the very cool character Rayne and dumb her down into a complete idiot? Double what?! Then you completely bastardize your own film? Triple fucking what?! This film is a just a mess from the get go with its awful plot, worse script, and horrid execution. It's a wonder that Boll was ever to get a cast like this.

My next point just happens to be about the cast too. All of this great cult actors are given horrible costumes, hilarious wigs/hairdos, and atrocious dialogue. Michael Madsen looks fucking ridiculous. Not to mention all of the half assed acting from everyone only makes the script look as horrible as it really is. No cover up here. Let's embrace this film for every awful piece of writing it has! Not to mention the fading in and out of the accents.

Uwe Boll is a genius though. Let that be know. This guy has the inane ability to take great video games with concepts and completely shits on them in film form. "Bloodrayne" is no exception. His awful directing is only made worse by the film's horrid editing and no matter how many fully nude prostitutes or random scenes of pointless gore once can put in it saves the film from being abysmal in any way.

I'm done with "Bloodrayne". This film is pretty much a disgrace to how the video game should have been put on the big screen. It's crap from its script, to the acting, to the directing, to the editing, and far beyond that. It's, honestly, one of the worst films I have ever had the displeasure of watching. That being said...let's move on the the sequel!

Written By Matt Reifschneider
Posted by DarkReif at 11:54 PM