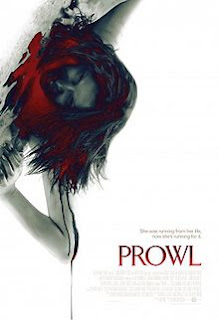 With the slew of vampire movies out there any more, finding anything original is a crap shoot. So instead of looking for anything that adds something new to the mythos, one must instead look for the heart and execution of the film. This is where "Prowl" is a crap shoot itself. Although the idea of the film isn't all that new (nor all that clever), it tries very hard to take a well executed shot at it. Making it a film that shouldn't be as good as it is, but not quite the refreshing film it could have been either. Somewhere right down the middle.

Amber (Hope) has never felt at home in the small town she has grown up in. She doesn't quite fit in with her close friends and working at a butcher shop has gotten...distasteful. So she is off to Chicago to find herself, but as her and her friends road trip up there, their van breaks down and they have to accept a hesitant ride from an odd trucker (Payne). Instead of a quick fix to Chicago, these young folk are going to find themselves on a trip to hell...courtesy of some very hungry vampires.

The plot is basic. Kids on a road trip break down and find themselves trapped in an abandoned slaughterhouse being hunted by vampires. Yep. Not that original. Yet, the writing and directing distinctly try to make this 'coming of age' tale as artistic as possible. The film spends a good portion of time really building up Amber and her issues with her life (throwing in some artistic and rather confusing jump edits to 'future events' that definitely pay off later) before letting the vampire horde upon her and her friends. This first act is actually fairly well crafted and intriguing with some solid acting from our leads (and Payne who takes a throw away role as the trucker and makes it memorable) and some artistic choices from the director. This part of the film definitely rose the bar on where it would go from there.

That's about the time the film gets a bit disappointing. Despite a rather interesting twist that makes many of the odd moments of the first act pay off, the film drowns in modern horror mistakes. The film has a great setting (an abandoned slaughterhouse/factory area), but they rarely use it to create tension or build that larger than life fear. In fact, there is very little good solid atmosphere at all here. With its quick edit, frantic in the moment style editing (which does save the film from having to pour out too much money into special effects) the film feels like a cluster where we don't quite know what's happening. Who died? Why? What's that? Am I supposed to be scared? It just becomes an ADD nightmare with some nice gory bits. It kills the mood and character build of the first part, which is sad because it was damn good.

"Prowl" might not be all that original, but its first half really built something well designed to carry a charm and artistic flair to a normally cliche vampire flick. It falls about in the last half with its lack of atmosphere and poor editing that quickly kill many of the great aspects of what the film could have become, stranding "Prowl" right in the middle of mediocre street with no car and no sign of perseverance.