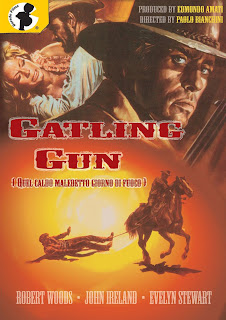 I have been interested in seeing "Gatling Gun" (aka "Machine Gun Killers") for a number of years now as cult director Quintin Tarantino has stated on multiple occasions as it is one of his favorites of the genre. Finally, after all this time I finally got my hands on Dorado's wonderful DVD release and now I can honestly say it was well worth the wait.

During the height of the Civil War Mr. Gatling, inventor of the first machine gun, unveils his top secret weapon only to have it stolen and himself kidnapped. Now a wrongly accused Yankee is secretly set free from prison to solve the mystery before the south get their hands on the weapon which could change the course of the war and history along with it.

I found the espionage plot to be rather engaging as it involves spies, kidnappings, and war time politics all wonderfully wrapped up in a spaghetti western backdrop. It's an detective story that will appeal as much to fans of espionage thrillers as spaghetti westerns and for that alone this has qualities not present in many other euro westerns.

The acting overall is really good for a low budget Italian film despite the film not really having a major star of the genre in the leading role. The dubbing also doesn't hinder the performances too much. The direction by Paolo Bianchini is also sure handed as he keeps the tension rising until the final act when all the loose ends come tied nicely together. The only aspect that annoyed me about the plot was the score. That's not saying it's a poor score as it isn't it's just more suited for an Italian swinging sixties Giallo murder mystery as opposed to a gritty Spaghetti Western.

I put off buying the Dorado DVD of this film for a long time as I was annoyed by the companies previous releases I purchased. Their releases of the Agent 077 trilogy ("Mission Bloody Mary", "From the Orient with Fury" and "Special Mission Lady Chaplin") and "The Man From Oklahoma" had the picture ratios screwed up so everything was stretched vertically, like it was an 2:35.1 ratio stretched to 1:85.1. Thanks to a friend for getting this for my birthday I am happy to say the company has shaped up as the film is properly framed in beautiful anamorphic widescreen format. It's a wonderful DVD of a rather obscure Spaghetti Western that is a must-see for fans of the genre.

Note: The Dorado DVD release is also completely uncut containing footage not originally released in the United States. This few extra minutes of footage is presented in Italian with English subtitles. Thanks Dorado! My faith in your company has been restored!

Written By Eric Reifschneider
Posted by Cronosmantas at 1:03 PM