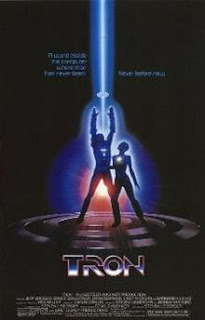 Seems like I'm the only one out there that didn't grow up watching "Tron". The computer fantasy film was ages ahead of its time in 1982 and with the sequel edging its way into my viewing queue, it was time to finally watch the original. Although its obvious that its special effects were the focus of this film, the story, as simple as it is, is quite effective and enlightening even here almost 30 years down the road.

Flynn (Bridges) is out to get what is his. After being let go from a huge new computer company by a boss that stole his arcade game designs (Warner), he is out to retrieve his rightful property. With the help of an old girl friend and her new beau who happens to still work at the company they break in to get some evidence. Flynn comes up against a massive self aware computer program called Master Control Program who zaps Flynn into the circutry of the computer realm. There Flynn must compete against the evil MCP in a series of deadly games, align with a security program Tron, and find a way to get out before he's killed.

What makes "Tron" so interesting is how relevant it is now. The ideas of 'users' controlling programs (or computer versions of themselves) in a fantasy world where these programs live out their lives and struggle against an oppressing rulers is so far ahead of its time its stunning. With the creation of Facebook and "World Of Warcraft" that easily parallel the concepts from a film in 1982, its weird to think that this film is nearly three decades old. It's like prophecy or some shit.

As for the film itself, it's not entirely great. The concept is certainly greater than the product. The visuals were stunning in 1982 with its computer effects and painted in neon colored spandex outfits (that more than hurt the eyes with its black and white backgrounds), but the story does lack some pizzazz. Once Flynn gets zapped into the Grid and the fantasy elements begin to take fold as a modern fairy tale then the movie starts to really move at some good pacing and fun speeds. The real world material leaves a bit to be desired though with some charismatic performances but lackluster arcs and basic story lines with little to no motivation. Then again, its far more fun to watch light cycle battles for this reviewer to begin with.

"Tron" is a fun and inspiring film that shocks with its concepts and awesomely built fantasy elements. The character work and some rather weak dialogue certainly remind us that its a Disney film and the motivations that get us to the fantasy realm seem rushed and rather silly at times, but the film still sparks with a chemistry that makes it worth the watch. A definite surprise to this reviewer with its solidity.

Written By Matt Reifschneider
Posted by DarkReif at 11:17 PM