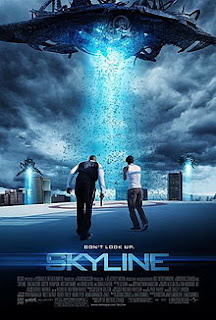 Alien invasions seem to be coming back in full force lately. Including two theatrically released ones about invasions in Los Angeles. This review happens to be about "Skyline", the rather low budget invasion flick directed and produced by the brothers Strause (whom gave us the shit storm "Aliens Vs Predator: Requiem" mind you) and featuring the wonderful talents of a lot of B grade TV stars. Although the film has enough punch to get those special effects and action sequences off the ground, it fails to really do anything with them besides confuse and alienate (haha, that's a pun) the audience, grinding a film with potential into a rather glitzy B movie experience.

Jarrod (Balfour) and his girlfriend (Thompson) are off to Los Angeles to visit an old friend (Turk...err...Faison) to bask in the sunshine for a nice stint. Their little vacation is interrupted by a big fucking alien invasion. It always happens that way, right? So now a small group of people are trying to survive against these monster/machines as the city around them collapses.

Throughout the entire film I was debating if "Skyline" was simply homaging a ton of older films or just straight up knocking them off. The general confusion of the characters and their stranded situation with no knowledge of what is happening in the 'big' picture owes a lot to "Cloverfield". The general look and style of the aliens is ripped right from the pages of "Independence Day" and "The Matrix" (they run on human brains like batteries!) and the entire feel of the film seems to throw back to those campy 50s style alien invasion flicks. If one wants to assume this is an homage to all of that, then have fun with its "Transformers" inspired action sequences and low brow character development. "Skyline" is fun and entertaining to look at.

Too bad the film really seems to have no impact or underlying emotional connection to the audience. Do we care about the characters? Most of them don't live long enough to give them a full story arc (cough, Terry, cough) and the ones we do care about seem wishy washy in their establishment. Half the time I'm not sure if logic is ever thought about (or explained) for some of their choices - for example, why isn't Jarrod or any one else freaking out about his relapsing vein crap? I would be flipping out ready to kill his infected ass! - and by the time the final act comes about (which it comes about straight out of left field) logic is left in the dust. It's like the writers didn't know how to end it and just sort of did the 'that would be a cool open ending to make a sequel!' crap, rather than actually thinking about what would work for this film.

Perhaps I'm being a bit harsh on a film that was supposed to be a B movie anyway, but dammit, there was potential here! Where did it go? Pissed down the drain of poor writing, irrelevant logic, and a focus on making it 'look cool'. Guess I'll have to wait for "Battle: Los Angeles" to come out to see if the other alien invasion flick was any better. As is, "Skyline" is a great lazy Sunday watch, but not much else.