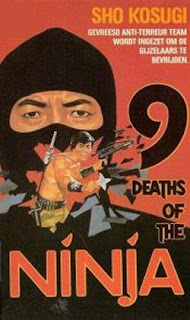 After making the highly enjoyable Ninja trilogy for Cannon films (which includes "Enter the Ninja", "Revenge of the Ninja" and "Ninja III: The Domination"), Cannon and star Sho Kosugi parted ways as apparently Cannon had enough exploiting the Ninja craze they helped create in the early 1980s (though they would later return with the "American Ninja" series). Kosugi, however, was not and went on his own to produce a number of Ninja films without the Cannon banner. Did they live up to the endless entertainment value of his previous Ninja trilogy? Well....

Kosugi plays.... what else... a ninja. He is one of three members of an inept rescue force that is sent down to the Philippines to rescue some hostages taken by a psychotic invalid Nazi and his army of lesbian women. No, I am not making this shit up.

Kosugi and director Emmett Alston actually play this film as a tongue-in-cheek spoof of the Ninja film genre and to be honest I didn't dig this approach. I preferred the unintentional hilarity of Kosugi's Ninja trilogy as they took themselves seriously. I found this tongue-in-cheek approach to be, well, rather doltish. Instead of making me laugh, like they tried to, it made me cringe with horror at the moronic antics the film displayed.

The filmmakers throw everything in but the kitchen sink to see what sticks. We get a lesbian army, a Neanderthal man who can stop bullets with his hand and a crazed Nazi invalid who looks like a cross between Dr. Strangelove and David Cross's character from "Scary Movie 2". Hell we even get ninja midgets thrown into the mix! I however did enjoy the immensely cheesy opening titles sequence obviously influenced by James Bond with Kosugi training with his sword around women dancing. It has to be seen to be believed!

Despite the films moronic approach and cheap production values there is no denying Kosugi's fantastic martial arts skills. Even with his massive amounts of eyeliner (that surprisingly doesn't get washed off when training under waterfalls) he still has a captivating screen presence which can make even his worst Ninja films at least watchable.

Instead of unintentional laughs I got a moronic spoof of the ninja film genre and it just ends up coming out puerile. The golden rule is as long as Ninja films play it straight, they're funny but when they try to play if for laughs, they're annoying and "9 Deaths of the Ninja" is annoying. I can't say I didn't' get some enjoyment out of it, just not near to the extent of Kosugi's much more gratifying Ninja trilogy. So in final words did "9 Deaths of the Ninja" prove that Kosugi on his own could make just as 'good' Ninja films he did under the Cannon banner? Well that's a big fat NO and I recommend viewers wanting to see what Sho Kosugi has to offer to start with his Cannon outings first.

Written By Eric Reifschneider
Posted by Cronosmantas at 9:21 AM