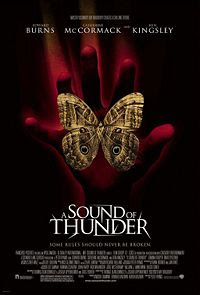 This would qualify as an "epic fail". It had everything going for it but it fails on every plane imaginable. First of all it's based on an iconic short story by celebrated science fiction author Ray Bradbury. Second it's directed by visionary director Peter Hyams, the man responsible for respectable science fiction films such as "Capricorn One", "2010" and "Outland". Third it has a strong cast lead by Edward Burns. Fourth it had a high budget with somewhere along the lines of $50-$80 million (depends on the source you look up). How the fuck did this fail so bad?

For those not familiar with the Ray Bradbary story, "A Sound of Thunder" is a science fiction plot that takes place in the not too distant future where time travel has been achieved and now is utilized as a vacation source for the rich and snobby. Edward Burns heads the scientific team that leads these people back into time in order to witness historic events and even kill dinosaurs. All this is achieved with the most delicate measures in order not to change something in the past and thus changing the future. All goes well until a equipment malfunction leads a vacationer to step on a butterfly which then of course changes the entire outcome of the future. Now Burns is in a race against time to fix the past in order to save the future.

Sounds like an intriguing plot doesn't it? It is and it's one of the most intelligent and important stories in the realm of science fiction. The film however is not...

The whole film feels rushed and unfinished. Our filmmakers take an intriguing plot and end up playing with like it's some B-science fiction drivel. We get lots of time paradoxes and monsters running around in the dark. Basically if you take Peter Hyman's films "Timecop" and "The Relic", stick them in a blender with a gallon of SyFy channel and "A Sound of Thunder" would be the result.

The acting itself seems underwhelming as our entire cast is going through the motions like they are really uninterested in the roles they are playing. Edward Burns seems bored and usually great actor Ben Kingsley, complete with sporting a awful futuristic wig, seems to treat the film like an easy paycheck.

The shit icing on the cake has to be the awful special effects. This came out in 2004, over a decade after Steven Spielberg's Jurassic Park and the CGI computer effects are just embarrassing, almost as if they aren't fully completed. I'm serious when I say these special effects are no better than the typical crapfest shown on SyFy channel... I shit you not. I was embarrassed for the filmmakers by these deplorable effects.

Director Peter Hymans' trademark darkly lit style is evident but he seems to be an engineer in charge of a train careening out of control. I truly like him as a director but this is an embarrassment and a black mark on his filmography. One can't put all the blame on him though as the film was plagued with production problems ranging from their locations being flooded to the production company going bankrupt before the film was completed.

Production distress aside this is still a clumsy adaption of a science fiction classic and ends up being an insult to Ray Bradbary's written work. It just fails on every level imaginable and despite it's large scale budget the final result would only be suitable for SyFy channel material. Of course it was a box office dud only making a small fraction of its budget back and pretty much derailed director Peter Hyam's career for good which is a damn shame as he is a fine director whose name should be attached to far better films than this. Pherhapes if time travel because a reality as in the film our filmmakers can go back in time and right this wrong.

Written By Eric Reifschneider
Posted by Cronosmantas at 9:11 PM