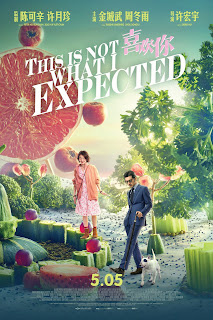 Food lovers are transported to the best interpretation of 'food heaven' yet as This is Not What I Expected takes the potential erotics of food (visually speaking) and cranks them up to be the most eye-pleasing series of close-ups and slow-motion preparation shots of all time, in cinematic history, period. Now that may be up for debate, and is perhaps a strong opinion to throw out into the wild upfront, but it is what I stand by, just like the confidence of Kaneshiro's masterful critique of said cuisine.

Admittedly aside from knowing what my taste buds like, and having a pretty comprehensive understanding of film visuals, and photography in general (not to toot my own horn, I'm nowhere near great or anything), culinary arts are something I leave to the experts, and it is apparent that the people involved in the making of this movie are indeed experts and avid food admirers of the highest degree. The philosophy on the courses presented throughout are well thought out and dare I say intellectual. 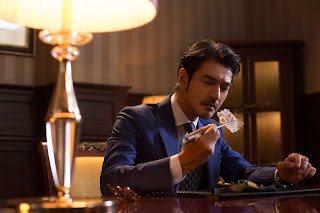 This stems from the fact that not much of the rest of the movie is near as well thought out and seems like a spoiled dish versus something delicate and extravagant. It's like watching the greatest food show on Earth, and having to sit through the longest padded commercials to get to the good stuff. A romance is the wrap around for these shots of gourmet perfection, and sadly, it bloats the film into a state of severe unevenness, which is a shame, for I do like a good romance. Unfortunately this feels like a made for television movie, lensed through some fairly good cinematography, though some other technical aspects, such as editing and even some of the lighting and shot composition throughout are hindered at times and really come off as a jarring experience rather than a fluid, ongoing feast for the eyes. If they put half of the thought and effort into the human elements as they did the food, we'd probably have one of the standout films of the year.

Takeshi Kaneshiro and Zhou Dongyu do have quite the chemistry together, but both of their characters are so over-the-top in their actions and cliched in their stereotypes (the groovy emotion driven hip chef and the douchebag rich know-it-all critic) that I kept sighing constantly, which isn't a good thing with any movie let alone one that really wants you to buy into their love which is never to be even though it is clear where it will end up no matter how hard they try. It isn't a spoiler, but let's just say they are too ignorant to throw certain things aside for their feelings which they both seem to have an abundance of. It's silly and contrived and it leaves you annoyed almost its entire run time. There are some moments of saving grace by way of a couple of out of place, but unexpectedly good scenes. Such as the two tripping on a bad batch of poorly prepped blowfish and then proceeding to wonder the streets severely under the influence, and as weird as that sounds and as odd as the idea is, everything shines in this one moment (even both of their performances) which is one of the very few highlights of the film for me. 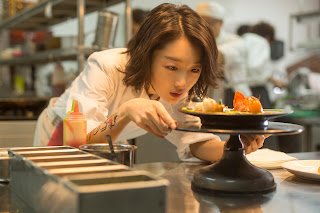 I keep hounding on the film, but I believe it will have its audience. This isn't the type of film I usually go for, but I would be lying if I said that, even stripping back expectations to just popcorn fluff, it works because it does not. You have so many by the number moments, coupled with the constantly swelling (insert emotional reaction here) of various instruments to get the waterworks out of you, that even the most basic cinema goers will probably scoff at the majority of it. I could see some very young couples perhaps liking this as a movie date night or something of the likes and maybe fans of Kaneshiro or Zhou Dongyu could find plenty to enjoy, but it is just too down the middle to garner any true praise as an overall cohesive piece of entertainment.

If you are looking for some beautiful food ecstasy, look no further, as long as you have no problem trudging through large piles of cinematic excrement to get there. There are plenty of illustrious appetizers to marvel at, but the main course and dining itself is a one time experience and this is not a place to eat at again. Do yourself a favor and seek out any other food film or wait for that special food crazed maniac to edit this movie down to just the eye candy and watch that composition for a much better experience. Probably the biggest letdown of the year for me thus far, aside from that one dog movie I was forced to go see.