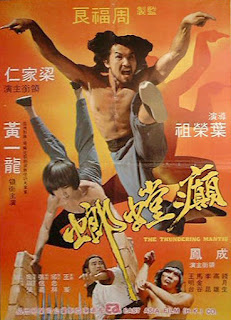 After seeing Sleeping Fist, it seemed only natural to revisit Thundering Mantis for review. It has the same director and two so the same stars and, generally speaking, I remember it being a better film overall. Those comparisons are legitimate too. The first two-thirds of Thundering Mantis even retain some of the same tone and fun, off the cuff vitality. Beardy plays an arrogant kung fu student who crosses the Jade Horse Gang while trying to prevent them from bullying, but to defeat their boss he will have to go to the older hermit and his trouble making grandson (played once again with the over energetic screen stealing appeal by Wong Yat-lung) to learn Mantis Fist. There are plenty of hijinks along the way as our main hero learns to be more attentive to his friends and it features plenty of strongly choreographed fights and the balance of action to drama to comedy is decent. There is even a sequence where the young kid gets plastered and tries to fight some thugs…so I guess that counts as humor. It falters in a few ways to really establish some secondary characters that could have built up to add to the emotional impact of the film, like his old teacher’s daughter who seems poorly utilized considering she has a fight sequence in the credits. However, the film is efficient in its narrative and has just enough silly slap stick humor and impressive fights to make the more mundane parts of the story entertaining.

The big trick of Thundering Mantis arrives in the third act. The film develops like must kung fu flicks as our hero learns the new style and then must eventually face the big bad of the film, but the third act abandons all of the comedy for some shockingly dark material. Not to give up too much, but there are a lot of people who die and cannibalism might be involved. No kidding. The finale is great though as the darker portions of the drama burst out in the high speed fight work and great stunts, leaving Beardy to really go extreme. It just feels a bit disjointed considering the humor that was such a big portion of the first two acts as its almost completely abandoned. Both portions and approaches work, but it does leave the film feeling a tad uneven. Otherwise, the rest of Thundering Mantis is charismatic stuff. Certainly worth the watch for kung fu fanatics. 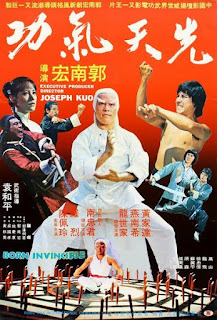 Seeing as I’m a huge fan of both Mystery of Chess Boxing and 7 Grandmasters from cult director Joseph Kuo, it was a shame on my family line that I had not seen Born Invincible. With the previous two films, Born Invincible is the trilogy that Kuo is seemingly famous for in the social circles that I frequent. However, despite that honor, Born Invincible is easily the weakest of the three. Not a bad movie in essence, but it’s one that relies on an off kilter structure to try and sell its story which makes it a tad hard to consume. It starts off by explaining why the villain of the film, played with a strangely effective intensity by Carter Wong, is damn near invincible before kicking off into the main story which is about a school that attempts to save an old man and his daughter from being slaughtered by the white haired villain and his partner (played by the ever awesome Lo Lieh). It’s classic kung fu 101. While the introduction is not necessarily needed as they tend to explain time and time again why the villain is almost invincible, it starts off on the right foot and features plenty of gimmicky characters and great fight sequences (the highlight of all Kuo films). It’s powered by a strong cast, even in many of the secondary roles, which hooks the audience enough to keep them attached to the film despite issues in the narrative structure.

The problem then starts to rear its head by the second act. There isn’t a true main protagonist for the film. It shifts repeatedly between three or four students at the school as they must take turns – for various reasons – in attempting to take down the villains. The initial transition to one of the lead students after the opening fight sequences is one that flows well, but by the third act it gets remarkably muddy in its intent. It even starts throwing in various characters that show up simply to drive the plot progressions and have no reason to be there outside of that. Fortunately, Born Invincible does pack in so many fights and keeps the characters and challenges gimmicky enough that it remains over the top entertaining, but the core foundations are too scattered to lift the film above its gimmicks (like both Chess Boxing and Grandmasters are able to do.)  Still, when it needs to be, the film ably handles being a very entertaining martial arts flick. The fights are phenomenal in their complexity and execution while it retains a lot of gimmicks to enjoy. Fu fans will definitely have fun with the film, but it fails to reach the heights of better Kuo films. Enjoy it for what it is, but don’t expect a revolutionary kind of experience.

Written By Matt Reifschneider
Posted by DarkReif at 2:59 PM