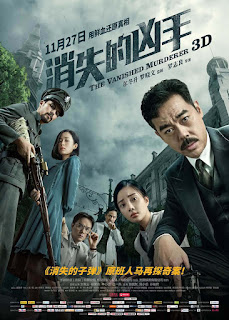 One of the most disappointing sequels I've ever had the unfortunate pleasure of getting through. I am not sure where to start, so this review may be a bit scattershot, but here we go!

First off, I loved the previous film in this 'Vanish' series, The Bullet Vanishes, but this uninspired sac of crap barely manages to be a cohesive narrative, faltering under its own repetitive mystery that echoes the 1st entry, to the point where you find yourself wanting the film to hurry along and reveal its already exposed self. It is beat for beat similar in too many moments and aspects.

You have a similar arc with a side character that has a similar revelation, and without spoiling, I saw it coming a mile away, only to sigh once it finally happened. Also, the lead character seems to be not the same as last time. He is less fun, less motivated, and seemingly less inspired. Lau Ching-wan does a fine job, but the character just seems off when comparing him to his previous journey. It's not a progression in his mental state of being, but just nowhere near as well written. The poor writing spews out into all other aspects too, not just the main players. They also took a returning character and sat her up as a baddie, only to completely drop the ball and create a romance between she and the lead that makes absolutely no sense.

On top of that, the patriotism injected in the story, designed for appealing to the masses comes off as extremely faux and is accompanied by some of the most nose-pointed-at-the-sky music to ever infect my ear canals. Juxtapose that with some sleek action scenes and... ah, but wait, the action scenes seem familiar too.

Okay, while I love the 1st film, I admit it borrows and even rips from the Guy Ritchie Sherlock films, at least it makes up for it in all of the other departments. Not only is this film garbage, but apparently the director had went on a Korean cinema binge, because shot-for-shot clones from both Na Hong-jin's The Chaser and even more blatantly so, Ryoo Seung-wan's The Berlin File, play out in identical fashion. Seriously, play the scene where Gianna Jun's character is escaping via a rooftop in Berlin File along side a certain scene in this, and you'll wonder how legal action hasn't been taking.

All of this ripping apart aside, the finale setpiece on a speeding train, was awesome and finally managed to reel me in. Sad that it took almost its entire 2 hour runtime to do so. My only positives, which are few and far between, would be that both the acting and technical aspects are quite strong, though latter even falls short in comparison with the first film yet again.


If you loved The Bullet Vanishes, due yourself a huge favor and skip this. If there ever is a 3rd film, which I highly doubt, then it surely has to be better than this embarrassment.