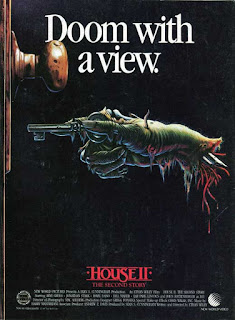 The entire House franchise is a love it or hate it ordeal depending on your taste in cult cinema. As each one goes, they do get weaker as films, but too often all of the sequels get thrown together as a terrible franchise when that is not necessarily the case. In fact, House II: The Second Story deserves some credit. Firstly, for its brilliant title and secondly, for being a film that’s just so weird and insane that it kind of works. It doesn’t work necessarily on the same level as most films, but it is so ambitious in its comedic and fantasy focus that it’s hard not to love it on a plane that exists only in the cult cinema realm. It’s truly a film that is so bad, it’s good. It takes a certain kind of film fan to enjoy what House II has to offer, but if you’re willing to accept its outrageous attempts at being bigger than it is…then boy, you’re in store for a treat.

Jesse (Gross) and his girlfriend Kate (Lincoln) have just found out that his parents have a house for him to inherit. They died when he was just a baby, but it’s a generational household that he’s more than excited to have. While researching his family though, he uncovers a mystery around a crystal skull that his grandfather found over a hundred years prior. With the help of his friend Charlie (Stark) he’s going to see what this skull can do…and it may end up turning his house upside down.

Written and directed by one of the co-writers of the first House film, House II does the smart thing as a sequel and instead of recreating the first film it tries to be its own thing. It does touch a bit on some of the tropes used in House (young male protagonist new to a large house, the sequence of different scare set pieces instead of one “villain” on repeat), but instead of a horror comedy this film changes it up more into a fantasy fueled comedy. There are moments of horror, particularly from the old west portion in the third act or the opening sequence, but this is hardly a horror movie like the first. It’s definitely more of a comedy with an adventure fantasy focus. Keep that in mind before you even start the film.

Knowing that, don’t expect too much from the actual writing of this film. Even during the documentary that is featured on this film, director Wiley stated that he only had two weeks to write it and, quite frankly, it shows. Occasionally the silly writing plays into the fun of the movie, where most of the second half and the adventures that our two heroes go on seem to be written purely for the sake of punchlines and silly visual gags, but it doesn’t necessarily make for an effective movie. Entire subplots with upcoming 80s pop artists, Jesse’s job, and his girlfriend are seemingly left to drift with little to support them and characters have almost no growth or development. This film is meant to be weird and fun and the writing doesn’t hinder that…even if most of it is hardly good.

House II, outside of just running full speed in trying to be as weird as possible at times, also does one other thing extremely well: special effects. The first House had some spectacular effects going for it, but this film has a little bit of everything. It has various stage designs, including a strange Mayan-ish temple, a jungle filled with stop motion animated dinosaurs, and a wild west shoot out on the classic dusty street. It’s also littered with massive amounts of make up for characters, puppets, and the previously mentioned moments of stop motion. The film throws a lot of things at the audience by having each room be a fantasy adventure themed ride, but it’s up to the task in delivering the visuals with punch and pizzazz. It’s got a damn caterpuppy that seemingly serves nothing in the film except for one gag and to be laughed at in the background. That’s the kind of film House II is.

Now I’m not saying that House II is some kind of forgotten diamond in the history of film. It’s bogged down by thin characters, a series of events that sort of resemble a plot, and no sensible dialogue that doesn’t seem intended to be quotable punchlines, but the film is also so strange and naturally so that it remains one of those wonderful ‘guilty pleasures’ that I will watch time and time again. Arrow Video has done the film a huge service with its new restoration and packed release, probably more than it deserves, but I’m immensely glad they did. House II: The Second Story is the kind of film that will last much longer than expected thanks to the sheer insanity of it…and that makes it all the more easy to love. 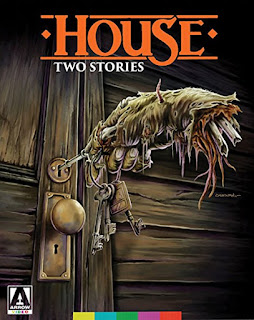