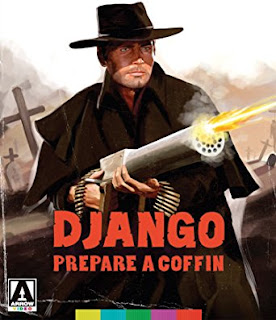 The explosion of Django films in the 1960s is almost laughable. Everyone and their grandmother was trying to capitalize on the success of the original Django and the amount of poor and mediocre Django films can be daunting for someone diving in for the first time. I know because I just recently started my journey into Django-sploitation. Fortunately, there are a handful of guides and people out there to help and it was from these handy chaperons that the film Django, Prepare a Coffin first came to my attention. As if on queue, it wasn’t long after that Arrow Video announced the US release of Django, Prepare a Coffin for a Blu Ray release. While not an official sequel, I’m glad that this one got a nice release because it’s one of the few Django films I’ve seen deserving to be placed next to the original on my shelf. It’s cohesive in its approach, adamantly trying its best to feel and continue on the story of the hero it’s based on, and it’s a solid blend of entertaining spaghetti western and thoughtful storytelling. Prepare a Coffin is definitely one of my favorites to feature this character.

Django (Hill) has been working as a delivery guy for high price items, well…has been. As it turns out one of his friends David (Frank) betrayed him for the gold shipment he was guarding and now his wife is dead and he was left for the coyotes. That was a few years ago. Now he has a plan and it’s going to require saving some falsely accused men from death row and bringing down the pain. This is the wild west though, so who can he really trust when everyone has a gun and is out for themselves?

Perhaps the biggest surprise that comes out of Prepare a Coffin is that the film has a shockingly dynamic narrative and writing approach at the heart of its spaghetti western entertainment. Serving as a kind of pseudo-prequel to the original film, Prepare a Coffin starts off by telling the story of the death of his wife and then goes into the rather complex manner of him trying to right that wrong. The way that the film builds and then uses parallel characters and subtle thematic elements is where it rises above the standard and it makes for a much more robust and effective film going experience than expected. The blurred lines between ‘good’ and ‘evil’ are a major component of what this film is gunning for, surrounded by a plot that’s quintessential western with gold robberies and corrupt politicians. The use of wrongfully accused men that Django collects to help him on his task is an interesting one that really feeds into this gray area nicely and as the film and the characters start to crumble, both on the ‘good’ and ‘bad’ sides, it only reinforces so many of the themes about family, selfishness, and power. It’s almost a brilliantly subtle way to go about things when the surface values are over the top and fun. If anything, the only real complaint that I have in the development of the characters and narrative flow is the lacking establishment of the relationship with his wife in the opening act. Although, even that is handled in a way that doesn’t effectively detract from the film.

Of course, Django, Prepare a Coffin is definitely an entertaining western romp too. The characters are all exponentially effective in their roles no matter how broad or detailed they are painted, with note to the two villains of the picture who simply eat scenery with little effort, and the action is fun and as dynamic as the narrative. Fist fights, chase sequences (with some seriously awesome stunts), and gun fights galore make this one just as entertaining as one would hope. By the time that it reaches its finale, which has a wonderful build to its graveyard setting, the film is moving so efficiently that nothing could really derail how entertaining it is. There are tons of instantly memorable moments, although I would argue that Baldi doesn’t quite have the visual flair as Corbucci did for the original, and fans of Italian westerns are going to love what this has to offer.

In a straight up duel, sure, Django, Prepare a Coffin might be a smidgen slow on the fast draw when compared to its predecessor Django, but this "unofficial" prequel is still sharp in presenting itself as an entertaining western and one that works on a lot of levels beyond that. The characters are fun, the action is crisp, and the thematic parallels of its story and narrative make it one that sticks around after the credits roll. Arrow once again comes through with this release and it fits nicely on right next to the original both for collectors and those looking for another entry to dive deeper into the realms of Django-sploitation. It comes highly recommended with six rounds emptied. 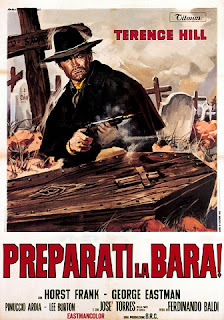