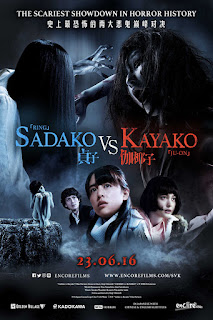 Crossover films are very divisive by nature, and cause a ruckus among the representatives of each side of the franchises coming together. I actually don't get excited for these joining of properties, as I don't find myself in the fandom of the subjects usually, but in this case, I love both of these Japanese cinema icons and their respective franchises, Ringu and Ju-On.

Sadako vs Kayako, as it were, is a Japanese horror fan's wildest dream come true. So many crappy doodles on papers all across the world of The Ring and The Grudge (yeah sorry about that) standing next to each other, has become a thing of reality, and it is as awesome as it is a let down. Get excited, adjusts your expectations accordingly (probably lowering them would help), and get ready for one of the most iconic horror showdowns ever conceived.

If I had to choose sides, I'd say I belong more to the Ju-On side of things, finding the story (at least that of the first two entries) more interesting, and the characters and its iconic ghosts more impressive all around. That isn't to say I dislike Sadako or her Ringu tales (I've seen Ringu 1&2, 0, and Rasen), I just have my preference. Taking these two characters (and Toshio of course) and making their worlds collide is something to be equally excited for and understandably skeptic about. It delivers, but never excels into the same realm as the best of either series it originates from.

I don't think it is necessary to even speak of the story, as you just get a splash of both worlds, and it leads up to a promised showdown, whilst spurting bits of J-horror goodness about; just enough to keep you satisfied as you wait for that clash of the giants. Is it worth it? Absolutely, but ultimately it leaves more to be desired. It could've been much scarier, though it is has its moments, mainly by way of jump scares, though they aren't as frequent nor as annoying as their Hollywood counterparts. There are some genuinely great chills, but those aren't to be spoiled. Some of the deaths in the film range from creative and noteworthy (when discussed) to laughable and asking to be scoffed at.

Taking this too seriously is nothing I set out to do and ended up indeed not doing at all. I knew it would be silly in certain regards, though it plays it straight, and works at times, but some of the things introduced in the second half of the film, in specific some characters brought in, pushed the film in a direction I frankly wasn't fond of. It goes from atmospheric and fairly effective, to more of a fantasy horror, and not so sure the transition works in the end.

When you finally see Kayako though, oh how satisfying it is, and her reveal goes down as one of the most satisfying and epic (sorry for using the word) intros of all time. It is the iconic moment of the film for me, and in fact stands out the most. There are other moments that nod to the great standout pieces of their respective films, but none quite match that one for me. I really am hoping for a sequel, given the ending, and I think it is inevitable it will happen, as well as it has done worldwide.

If you were hoping for something as scary as either franchise has been separately, you will be let down ultimately, but if you go through with the mindset of expecting something more along the lines of Freddy vs. Jason, you may be surprised at its entertainment value. It is a good watch, and I wanted to love it, but it was a mixed bag over all, even though it had me through most of it. Do see it, because who knows, maybe it will be loved by others more. If I were you though, I'd just seek out the director's best work, Noroi: The Curse, and prepare yourself for a bowel movement.