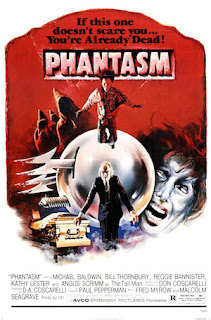 “This guy’s not going to leak all over my ice cream, is he?”

As a young horror fan, the Phantasm series was always one that sparked my curiosity and the original film, Phantasm, was one that blended the right amount of horror and humor to be entertaining enough to land in regular rotation. Over the years though, the original film was one that I found myself returning to again and again and with each additional viewing I found that it only got better with time. On the surface, it’s a dark comedy littered with stark visuals and creepy atmospheric moments, but it’s effectively layered in regards to how it navigates a series of thematic approaches to its story. With the release of the Phantasm series in a delightful box set from Well Go USA, it was only my pleasure to have a reason to review one of my favorite cult films for the site. On top of that, this new Bad Robot and director approved remastered version of the film is stunningly well done and a treat for fans – or those new to the entire Phantasm universe.

Michael (Baldwin) is still coping with the loss of his parents and his older brother Jody (Thornbury) may not be around very long to make sure things are right. At the funeral for one of Jody’s friends though, Michael notices that things are not all what they seem to be with the funeral home. One of the workers at the funeral home, a tall man (Scrimm), seems to be up to something and there are other things that seem to go bump in the night. As he starts to investigate, it will take the help of his brother Jody and their friend Reggie (Bannister) to uncover a horrific conspiracy.

Director Don Coscarelli has come to be known as an adventurous film maker, rarely wanting to follow the lines or stick to the well worn path, and his style and approach is apparent immediately with Phantasm. The film tends to maneuver between a variety of styles including touches of being a slasher, a supernatural ghost story, and even fringing on cult horror elements. Right from the beginning though, the film never hesitates to use “nightmare” logic in making the narrative flow work. Within the first fifteen minutes, our main young protagonist Michael visits a fortune teller and her granddaughter only to be told that the things he sees are ‘only in his head’ and it’s this odd moment that really foreshadows the rest of the film as it blurs the lines of traditional storytelling and dream like visuals to bleed them together. This dream like quality that Coscarelli and company use for Phantasm can be hard for some viewers to swallow, but with repeated viewings it does pay off in the little details. Is the film just the imagination of a young boy and his way to cope with the death of his family, personified by an evil tall man with horrific gadgets that bore into people, and the larger questions of an afterlife where the dead are enslaved in another plane of existence, or is there truly something sinister afoot? Phantasm loves to play it loose with its structure and approach giving the details of the characters and their backstories in brief bits of dialogue or smaller indications in their interactions and it all feeds into this tone that makes Phantasm feel particularly unique and fresh. It’s thoughtful in its dream like approach and it builds with repeated viewings.

Of course, it certainly helps when the film is also quite charming and humorous in its dreamlike horror approach. For every scene of intense shock or visual creepiness, there is a sense of dark humor to it all and the cast and writing play up some of the oddities of its story to give it a strange sense of light hearted approach to its themes of death. The performances can range a bit from campy to impressive, but it only plays into the charm and dream like approach of the film. The Tall Man makes some strange faces as he delivers some great one liners and many of the secondary characters can be odd (that includes the hooded dwarves that spew yellow blood) and this is a style that Coscarelli would carry with him throughout most of his career. Again, if you are not willing to buy into the style it can rub an audience the wrong way, but for this reviewer it’s a one-two combination that only makes it more effective.

Phantasm is not only a film that uses its themes of dreams, death, and coping to blur the lines of reality, but it’s a film that ably blurs lines between being a cheesy 70s horror with copious amounts of dark comedy and being a film exploration of death from the view point of a young boy in an artistic manner. This isn’t just another silly horror franchise at this point, this is a rather unique and engrossing experience that really does blur the lines in so many fantastic ways. It’s a damn experience and this 4K remastering is the perfect way to handle that experience. For my money, this is one of the best horror films to arrive from the 70s and one that not only resonates with its thoughtful approach to entertainment, but one that has lasted the test of time with a remarkable grace considering it features a sequence where a cut off finger transforms into a violent giant fly and an undead dwarf tries to run our protagonists off the road in a hearse.  Take it for what it is, but Phantasm is certainly an experience.

“You play a good game, boy, but the game is finished. Now you die.” 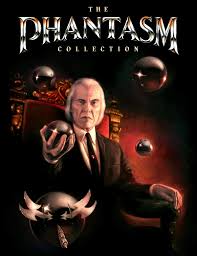 Written By Matt Reifschneider
Posted by DarkReif at 1:36 PM