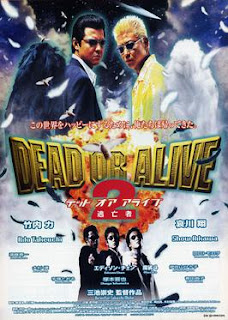 If a person were to judge the direction of Dead or Alive 2: Birds by the finale of Dead or Alive, then you wouldn’t be too much off the mark in the outrageous tone that it uses. However, the mistake in that line of thinking comes from believing that Dead or Alive 2 is a sequel to Dead or Alive at all. Outside of the title, being directed by Takashi Miike, and starring the same two leads, there is no actual story element or character that connects the two films. There are a few thematic elements that could be seen as carrying over, but they are some of the same elements that one sees in a lot of Miike films. Even with no connection, Dead or Alive 2 might just have the edge on its predecessor by embracing a lot of the quirky elements of its story and characters and delivering a phenomenal third act worthy of the Miike brand. It’s a strange film that doesn’t always feel cohesive, but that doesn’t stop it from hitting a lot of amazing moments with pizzazz.

Mizuki (Show Aikawa) has just been hired to take out another yakuza boss and he’s going to be paid a lot of money for it. However, just before he takes the shot, he sees another hitman (Riki Takeuchi) assassinate the same target. It also just so happens that this other hitman is a childhood friend that he hasn’t seen in years. This leads them to try and take the money from the job and run, hiding on the small island they grew up on. This doesn’t sit well with the yakuza and soon they find themselves being hunted.

Like most Miike films, Dead or Alive 2: Birds is about outcasts who find themselves at a crossroads in their life. Thematically, the film sits well with plenty of his other yakuza films as the two protagonists (it’s hard to call them heroes, even when they attempt to do better things with their lives in the second half of the film) reconnect and a sort of fate is set on course. The use of Show Aikawa and Riki Takeuchi here is a brilliant one as the two have immense chemistry on screen and are powerhouse actors whether it’s the more subtle moments that they use or the more outrageous elements of their characters. Miike knows how to make that dynamic work and it’s truly the heart and soul of why this film soars, particularly in the third act when the yakuza finally catch up to them and a final showdown occurs. Just the last 15 minutes of the film are some of the best performances and dramatic (slightly comedic in tone) scenes that Miike has ever put to film and that’s saying something.

Of course, Dead or Alive 2 is a strange film too in true Miike fashion. The tone is at times slightly fantastical as Miike likes to use imagery that’s not nearly as realistic or grounded as the rest of the film. A series of assassinations performed by our two protagonists in the third act is punctuated by wings that sprout from their backs (the use of wings and birds is a running theme in the film along with this visual that seems to bring in a parallel about ‘avenging angels’ and what not) and the film is littered with moments where humor, emotion, and immense violence are balanced. None are more impactful than a sequence where our protagonists are performing a children’s play (with weirdly adult moments) that’s interspliced with sequences where yakuza hitmen are looking for them and slaughtering dozens of people in their wake. It’s moments like these that truly raise the film above and beyond.

For fans of the series or those new to it, this release of the film by Arrow Videos is the way to go too. The remaster of the film is much, much better than my original DVD that I had. It also comes in a pack with the other two films in the “franchise” so it’s a huge value too. If anything, the price of this set is worth it just for this entry and all of the special features, booklet, and commentary are just icing on the cinematic cake. This set is worth the purchase even for those who are curious.

When it comes to the Dead or Alive series, Dead or Alive 2: Birds is easily the best one and it highlights the quirky nature that Miike brings to a film like this while never losing the emotional grounding or artistic elements that parallel the themes and characters that drive the plot. It’s a film that can certainly rub some viewers the wrong way with those visuals quirks or outrageous moments (the opening sequence where a man explains who to start a yakuza war with cigarettes is worth the watch alone), but it’s so well balanced and grounded that it’s hard not to love this film even when it’s flawed. 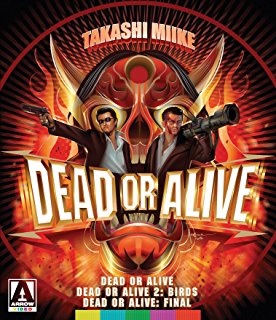