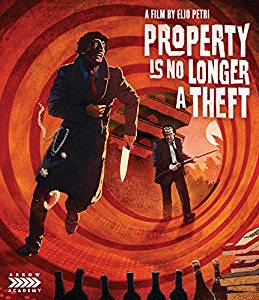 Property Is No Longer a Theft is the kind of film that I had to chew on for quite some time before putting a single word down about it. Part of this is because the film defies the limits of the genres that it fringes on, never settling on one to be the focus and instead existing in the blurred spectrum of definition. The other part is that the film is odd in its execution. It’s a film where themes and focuses between characters and plot seemingly float in and out leaving far more questions about what the intent of the film was and its commentary than anything else. It’s a lot to chew on. It’s no wonder that Arrow Academy decided to give the film a nice robust home video release. Property Is No Longer a Theft is the kind of artistic film that rests just below the mainstream appeal of a loud cult audience that will stand up for it as years go by, yet it deserves some kind of attention because of its artistic merit. While my initial feelings on the film are mixed, there is mad respect for Arrow Academy to give this film some love and dedicated cinephiles should most certainly experience it for themselves to see how they feel about the entire thing.

Mr. Total (Bucci) is sick of his job at the bank. In particular, it’s the dedicated customer (Tognazzi) of the bank, a very rich butcher and questionable human being, that starts Mr. Total on his self-destructive path towards his hatred of money. Quitting his job, he decides the only way to live is to start stealing things and the main focus of his new found obsession The Butcher whom he vows to steal everything that he considers property. A knife, his hat, even his mistress.

On the surface, Property Is No Longer a Theft is a film that would seem to be a dramatic thriller with comedic elements. On the surface, that is. The film, tonally, meanders around being dramatic, thrilling, erotic, and comedic with almost no regard to what piece is going to show up when. The film does an admirable job in navigating the narrative tone in smaller moments though and it flows well during individual scenes as characters interact in unique and often non-traditional ways. The overall structure of the film however tends to be a tad choppy. Character monologues, where individual characters address the audience in a surrealistic black box and shadowy location, cut the film into various parts where the protagonist role can change for that next fifteen to twenty minutes. At first, it feels unique and fresh, but by the third act it feels as though it might be a stylistic choice that’s meant to cover up the lacking narrative flow in changing up the driving motive for characters during that portion. The rich butcher’s girlfriend, for example, is followed for a portion of the film in the second act, but only pops up randomly after the fact as her character becomes less important to the plot on hand. That’s how Property Is No Longer a Theft works with its story and it can be both intriguing and often frustrating for its audience.

This approach to the narrative with its shifting focuses and style does give Property Is No Longer a Theft the ability to be layered and artistic in its thematic focus. While there is a lot to consume in how the director and writers approach the subject matter of economic power, which is covered very thoroughly in the booklet that comes with the film and is perhaps the best feature and required reading after seeing it, it does make the film one that different viewers will see differently. Interpretation of the material is inherent to the enjoyment of the film. The execution solidifies this fact as the performances, tone, editing, and visual blend all support the film’s artistic commentary on the power of money, property, and materialism. I’m hardly an expert on the subject matter or the time context of the film, but it certainly has enough universal satire and commentary boiling underneath its dry wit and quirky approach that the film is still relevant to this generation.

As mentioned, this Arrow Academy release of the film is robust and swollen with great features for those looking to purchase Property Is No Longer a Theft. Perhaps the best part was the extensive essay included with the release that is the perfect viewing companion, but the rest of the release is stacked too. This goes along with the crisp restoration of the film that will have fans of classic Italian cinema stoked to dig into the release. You can read a list of the various features that are included on this release below.

Even as I continue to chew on the dense thematic approach and execution of Property Is No Longer a Theft, it seems to be that no matter how I feel in the end that this is a movie that affects its audience. It’s a trait too often overlooked in cinema and the ability to strike a strong message, but allow its audience to interpret its style and approach in different manners makes the film a sure fire overlooked gem. Not all of it works on the whole, mostly due to its strange structuring, but the films makes a strong enough mark that it comes with a huge recommendation. 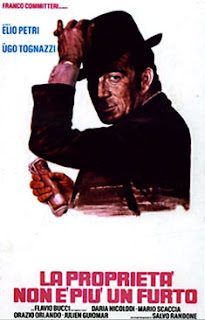