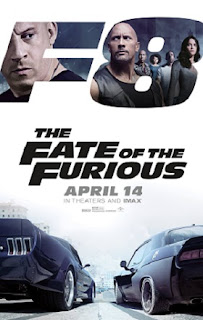 There are now eight films in the Fast & Furious franchise so I’m not sure a review of the latest entry, The Fate of the Furious, is going to convince people one way or the other to enjoy what it must offer. At this point, either you buy into the entire concept or you don’t. The way that this franchise has embraced its own ridiculousness is kind of brilliant. I’ve said this before about the various sequels that I’ve reviewed for the site and for Fate (which I will refer to as F8 as an example of how it embraces its own outrageousness) is no different. In fact, it might even double down on giving its audience what it wants: over the top characters doing over the top things in over the top situations while blowing up things in over the top manners. In the whole, while I think F8 is not nearly as balanced as the previous handful of outings since the franchise shifted into full on action spectacle, it is a film that once again fires on all cylinders to entertain. Do we really need more than that?

Dom (Diesel) and Letty (Rodriguez) are enjoying their honeymoon in Cuba, racing, embracing, and destroying property like people in these films do, when a mysterious super hacker Cypher (Theron) shows up. She has something on Dom and forces him to betray his team to help her in executing her plan. That leaves Letty and the rest of the crew to team up with Mr. Nobody (Russell) and Shaw (Statham) to find him and find out what he is doing.

The one thing that this franchise has always used to ground its ‘splosions and mayhem into an emotional foundation is the idea of family. Blood, inherited, or whatever, this idea of extended family and the value of devotion to them has always driven this series. So having the patriarch of said family, Dom, go rogue and work for the baddie was a fun twist on the usual spin of the series. However, don’t worry, this film is not about to start treading into gray area on this matter by having this sudden traitorous development rock the boat. It slams down all of its money on the idea of standing strong with your family like every other entry. The core belief system isn’t going away, some of it to my dismay as I was hoping it would start to explore a bit of new territory, so keep that in mind as you go into the film. Using an increased sense of humor, fully explored in many sequences like having Dwayne Johnson coach a young girl’s soccer team or the usual Gibson/Ludacris banter, the film feels like it doesn’t want to explore the darker themes at all that it touches on. As we see Dom struggle with his own betrayal, the film hesitates to really reach out for those emotions. So in a sense, it’s a bit disappointing that F8 doesn’t run with its own twist in the way it could have. Then again, this is a popcorn flick and one that has developed a formula that works so it doesn’t necessarily want to change things up that much.

As a popcorn flick, F8 works in the same fantastic ways that this franchise has always used to build its massive international audience. It takes very charismatic characters and lets them do outrageous feats of glory. While new-to-the-franchise director F. Gary Gray does occasionally struggle to give the action a strong flow with some choppy editing and muddled clarity of visuals, F8 gives the audience exactly what it wants in entertainment. As mentioned, the humor seems to be increased in the film (benefited from the new Johnson/Statham insult/manly chest thumping that drew roaring laughter from the theatrical crowd) and it increasingly jacks up the spectacle as it goes. None of it seems logical, truthfully it never has in these films, so just buckle in and run with it. Whether its Dom racing a flaming car backwards in Cuba, a massive prison riot, perhaps the biggest car jam ever on the streets of New York, or a finale that jumps between Jason Statham fights off a plane of thugs with a baby and the crew chasing down a submarine in Russia, this film really does entertain on the action front. The final act is serious well executed and paced and fans of the franchise are going to find a lot of things to love with the spectacle and the characters within said spectacle.

The Fate of the Furious might be a slight bump down from the heights of the previous three entries, it still features a lot of elements to enjoy. The increased screen time for The Rock and Statham, the addition of Scott Eastwood as Mr. Nobody’s new protégé, and Charlize Theron (who eats up scenery as the villain) make F8 a highly enjoyable time at the movies. The action is bigger than life and it once again is self-aware of why the films work and runs with it. It could have gone a bit further into the darker elements of its messy plot (which, by the ways, pulls a Spectre concept in a more natural way than Spectre did) and F. Gary Gray struggles a bit to keep the action flowing, but it’s easy to admit that this entry is just another rip roaring enjoyable entry into the series.

If you love this franchise, you’ll love this film. If you weren’t sold before, then F8 is not going to change your mind.