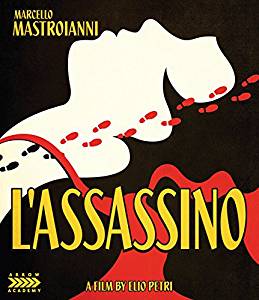 As the second film from director Elio Petri that we are reviewing this month, The Assassin is also his debut and it’s a doozy. Playing out like a kind of murder mystery with noir elements, the film is not nearly as upfront with its layered commentary as the other film we just reviewed (the very awesome Property Is No Longer a Theft), but the effective way that it unravels its story in a leaping structure and the crisp manner that the film builds into its third act makes it one that we cannot recommend enough. It may not be the most original film out there, but the execution is immaculate and this Arrow Academy release belongs in any self-respecting cinephile’s collection.

When the police arrive at Alfredo’s (Mastroianni) home, he has no idea why they are there. He thinks perhaps they are there to buy some antiques from his store. Soon he finds out that he’s the main suspect in a murder that is going to have his entire life ruffled, torn, and investigated. Is he going to like what they show him about how he lives?

As The Assassin played out, there was one term that continually came to mind throughout the entire thing: balance. While Elio Petri would later become known for his efficient style in crafting film, this debut of his indicates that this is an innate talent he used right from the beginning. The balance always seems in check with the film. Plot to character, style to substance, pacing to atmosphere, these are all things that The Assassin understands in connective ways and utilizes them to produce a film that’s easy to watch while still being an effective film for the audience which leaves them inherently engaged. A large portion of this feat is derived from the plethora of resonating performances from the cast. Marcello Mastroianni is the cornerstone that bears most of the weight of the film as we see him broken down from an almost offensively engaged police force that are looking at him as the prime suspect in his lover’s death. His character arc, subtle at first and increasingly emotional and abrasive as the film dives the into past details and his life is the crux of the film’s core thematic material which calls into question the gray moral areas of a modern business focused young man. However, it’s a lot of the phenomenal secondary casting that really deepens his work and the work of the narrative that gets the audience to where they need to be emotionally and attached to the film’s final destination. In particular Micheline Presle as his lover, shown only in flash backs in leap frogging sequences, steals a lot of the moments with what I might call ‘fierce subtlety.’ The Assassin could often come off as a character study for its lead, but it’s a lot of the supporting efforts of the atmosphere and secondary characters that sell the whole.

To add to engaging effect of the story, The Assassin also features fantastic use of structure to its narrative to push and pull its audience along for the ride. Since the film is centered around the police investigation of a woman’s murder and her lover who remains the prime suspect, it very much plays out as a mystery meant to be unveiled for the audience…an audience who is not sure whether the main character did it or not. To build this foundation, it flashes back to develop their relationship and showcase the various pieces of the investigation that the police are looking into. While the leap frogging time approach is used often in cinema, it’s impressively smooth here and it allows the film to balance its noir type plotting with an artistic and emotionally driven atmosphere that works wonders for the characters and engrosses the audience. If there is any trick in the sleeve that works more impressively than expected in The Assassin, then it is this approach.

Truly, as a debut, The Assassin proves just how insightful and strong Petri is as a director. A grossly overlooked piece of Italian cinematic art, this film deserves a lot more credit than I have seen it receive in the cinephile community as a strong film that uses impeccable balance to execute its intent. The Arrow Academy release of the film, featuring a restored version of the film, is highlighted nicely by its features too – once again topped by a fantastic piece of writing in the booklet from Camilla Zamboni that is a must read as a companion piece for the film. The rest of the features are listed below. Take our word for it though, The Assassin is a diamond too often buried by the director’s more famous later works and it should be on the list for any cinephile to rediscover and appreciate. The film and this robust release come with the highest recommendation. 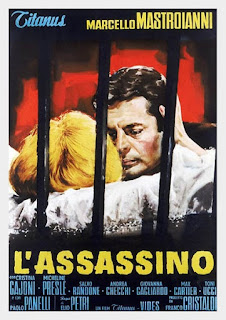 
FIRST PRESSING ONLY: Booklet featuring writing on the film by Petri expert Camilla Zamboni, Petri's own critical analysis of 1950s Italian cinema, plus a selection of contemporary reviews

Written By Matt Reifschneider
Posted by DarkReif at 10:20 AM