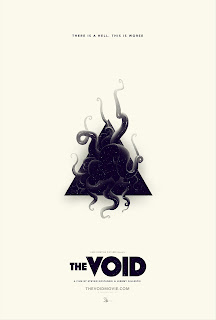 Here at Blood Brothers, we have been fans of the directing and production company Atron-6 since the release of Manborg. Our love for their love of cult genres and their ability to harness the style and pizzazz of films and genres from decades past has made it sure that we never miss one of their films. This group of dedicated cult cinema enthusiasts are now shaking off the shackles of their more comedic and homage tones for their latest film, The Void. While there are certainly elements of the Astron-6 concept here in the film, this is certainly their most serious and perhaps darkest film to date and it’s a phenomenal experience to have. The Void remains a stylistic love letter to the likes of Carpenter, Fulci, Lovecraft, and Gordon, but it also features a wit and modern speed that make it worthy of a 2017 audience.

Small town life has its own problems. Just ask Daniel (Poole), the local law enforcement. Everyone knows everyone and when a tragedy strikes, like it did between him and his wife Allison (Munroe) then it gets around quickly. However, on this night that’s the least of his worries. After bringing a bloodied drug addict into the local hospital that’s being moved, he unwittingly unleashes a new kind of terror on the last people in the building…a terror from beyond.

The Void truly is the kind of film that takes a lot of 80s horror style and gives it a once over for modern audiences. Directors Kostanski and Gillespie have an obvious love for the era and cult cinema, just look at their filmography and you’ll see this is a repeated theme, and they attempt to recreate the same tone and feel of the low budget 80s horror movie in full. Using plenty of simplistic and effective imagery, The Void ably handles the idea and runs with it. Whether it’s the full on practical effects of the monsters that show a large amount of Screamin’ Mad George influence (often bringing to mind a wicked combination of John Carpenter’s The Thing and Bride of Re-Animator) or the atmospheric vague detail of the strange cult that seems to be connected to the monsters in the hospital, The Void really does feel like an 80s flick. It’s relentless with how smart it is in knowing when to show an audience something and when not to, a tactic that is lost in a lot of modern horror currently. It’s loaded with a lot of stock characters from those bygone films and it’s executed to give the audience a frantic pacing that never stops to give them a breather. If there is anything to pull away from the film, it’s that it doesn’t hesitate to unleash its Lovecraftian influence in either the visuals or atmosphere and that’s a huge plus to the film.

Perhaps the one issue that arises is that the pacing and vague narrative two-hit approach can leave the audience a bit disconnected from its characters. It wastes no time in throwing the audience right into the middle of the entire situation of its plotting and instead opts to build character interactions and connections through small bits of dialogue on the go. This makes for a massively entertaining experience, but one that may not hit the emotional moments nearly as hard as it might have with a bit more exposition and build in the opening act. Fortunately, The Void has just enough charm and effective pacing to overcome a lot of it, thanks to the dark humor that sneaks into some of the interactions, and it remains a film where the style contains enough substance to get by with as little damage as possible.

Once again, Kostanski and Gillespie are able to blend their love letter to cult cinema of a specific era into a rightfully effective modern film. The Void contains enough awesome homages and style that even the thinner scripting and characters seem to be part of the intent and not necessarily a detriment to the film. It’s a bit tongue in cheek for some as it piles on some outrageous moments and slightly over-the-top dialogue, but the ultimate goal of the film as an atmospheric Lovecraftian gut punch works making The Void perhaps one of the best films from the directors. It’s not a film for everyone, but it comes highly recommended for those who are fans of 80s films like Re-Animator, The Thing, The Beyond, or Hellraiser.