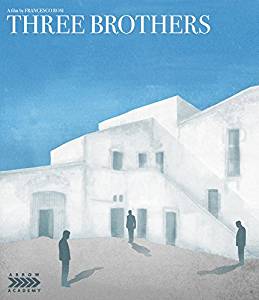 The more artsy avenues of cinema have not necessarily been ones that we transverse here at Blood Brothers, but the recent American releases for Arrow Academy have certainly opened some of those gates. Just in the last few months, we have started to explore the realms of high end Italian cinema after spending years digging through the trenches of their exploitation and genre work. Reviews for films like Cinema Paradiso or a couple new releases from director Elio Petri have kick started this move and the next step is into the works Francesco Rosi. While the director has a few iconic titles under his belt that many cinephiles will recognize, the focus of this review is on the newly released Blu Ray edition of his political and familial drama Three Brothers. Layering a simple plot around the reunion of three very different brothers who return home when their mother passes, Three Brothers is far more than just another family centered drama where the characters have to work out their intricacies. This is a film that works on a variety of layers of character focus and various commentaries. It’s easy to see why it was nominated for an Oscar the year it came out.

In a small town in Southern Italy, it’s the sudden passing of a woman that will bring the family together. Three brothers, one a judge, one a child services provider, and one a blue collar factory worker, all come back home for the first time in years and, with the country still in a transition after World War II, each one comes with a different perspective on the world.

The way that Three Brothers plays its hand is rather a double edged sword depending on the viewer watching it. The plot of the film is simple. The mother dies and the three brothers come home to a world that is seemingly much simpler than the ones they live now. As someone who is used to looking for the ‘angle’ or the ‘gimmick’ in a film and how it approaches things, Three Brothers doesn’t have one. It’s a blended character study and is much more focused on delivering subtle commentaries and slight of hand character building than telling a plot meant to be followed. In a way, this is a film meant to be an analysis of post-war Italy and how it affects all different kinds of people as told through the viewpoints of three different characters (or four if you count the father/granddaughter and what they represent as characters who are not quite absorbed in worldly affairs). This can be problematic for some as the film seemingly doesn’t build to much of anything, outside of series of daydreams/dreams of each brother in the third act about the future, and plot wise it's almost too simple for its own good.

The simple plot does allow Three Brothers to really focus on delivering grounded and thematic elements that might have been brushed to the side if there was more plot progressions or an endgame in mind by the script. Director Rosi loves to paint ‘moments’ in visuals/tone and essentially injects the entire film on emotional pegs from its characters. Some of these are more obvious ones (a flash back of the father and mother searching for her golden wedding ring on a beach,) some are more surrealistic ones (the dream sequences in the final act of the three brothers,) and some are just vague explorations of theme (the granddaughter’s examination of a decaying farm shed), but all of them are wrapped in the tone and visuals of the director that make them lush for interpretation. While the political and social commentaries feed into these in varying manners, ones that are explored more fully in the writing included with the Blu Ray, Rosi and the cast deliver a film that’s ripe with layers and one that cinephiles are certain to go ga-ga over.

Three Brothers is certainly a cinematic experience. Occasionally it finds a hiccup, as one brother seems to be dominated by the other two in screen time given, for example, but the film certainly delivers on a robust and thoughtful cinema experience. It’s more theme and tone than plot, but the dedication to that concept by director Rosi and phenomenal performances all around make it one that’s worthy of the watch and anyone that is even mildly interested in the artistic elements of Italian cinema will want to add this to their collection. The release may not be nearly as packed with features as we’ve become accustomed to from Arrow Academy, but the ones it does have truly add to the experience of the film and that makes a statement. This is a slow-moving film meant to be analyzed in a much deeper manner, but Three Brothers can’t help but get a huge recommendation from those inclined to the artistic elements of cinema. 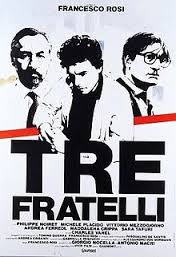 
FIRST PRESSING ONLY: Booklet featuring an essay by Professor Millicent Marcus, a 1981 interview with Rosi and a selection of contemporary reviews (first printing only)

Written By Matt Reifschneider
Posted by DarkReif at 8:58 AM