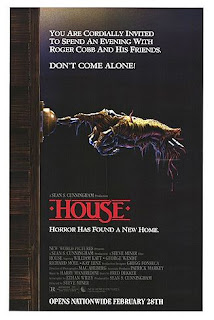 House is a film that firmly resides under the ‘cult cinema’ tag. Despite being a fantastic blend of horror, humor, and just a hint of heart, House has fallen into one of those categories where fans love it, but it doesn’t actively seek out a new fan base as it goes. This is tragic. The film is a blast. It takes its balance of genre bending to delirious 80s levels of cheese with its wink-wink attitude and fantastic low budget special effects. Yet it goes wildly unseen and underappreciated. Fortunately, cult icon distribution company Arrow Video seems out to change that fact. House is getting a needed restoration for a two film box set (titled House: Two Stories) that features both the original cult classic and its even stranger and more maligned sequel House II: The Second Story. In the UK, the boxset features all four of the films from the series which comes highly recommended too, but here in the US it was still wonderful to see the first two get the much-needed love that they deserve as truly unique and off beat films. In particular, House is a film that needs a lot of reassessment as a true underground 80s classic.

Roger (Katt) is moving into his Aunt’s old house. He’s set to write his latest book, a memoir about his time in Vietnam, but the house he means to do it in has plenty of its own history. It was the house his aunt committed suicide in, but it was also the house where his son went missing a few years prior that tore apart his marriage. Looking to face his own past, Roger is going to have to face a few more ghosts than that…and these ones may be even more connected to him than he imagined.

On paper, House would seem to be your average haunted house horror flick. A comedic horror film on top of that, a surge that was seeing a lot of success in the mid 80s when it was released. Yet, House works on two levels for its viewer. The first is just how it would come off on said paper. It’s a film wrapped around an increasingly strange and effective series of horrific visuals and timely gags meant to scare and tease its audience. This is what most fans and those who have seen House remember about it. Whether it’s the strange nightmarish finale that features surrealistic moments of endless voids in mirrors, a bloated purple witch that just won’t die, the worst and most most haunting fish decorations of all time, or one of the most stressful babysitting experiences ever put to film, House is willing and able to run with its quirky behavior and off the cuff attitude. William Katt is up to the plate on straddling the comedic timing and horror elements of the film, keeping the audience connected while shit around him goes bump in the night and the special effects make sure that each sequence is memorable in its own regard. The usual skeptical neighbor plays in nicely with the plot to add to the hijinks (playing on its own cliché moments in a fun manner) and the film remains scary enough to work as a horror film too.

House is a film that also works beyond being just your usual horror comedy. The silliness of its timing and horror focused (almost cartoonish) use of special effects might be what everyone remembers, but the film also works on more foundational levels of storytelling. House is littered with all kinds of quirky characters, including the lead Roger, yet underneath it all there is a very effective concept about the a man facing his past failures in life, personified in strange manifestations of the house. Whether its his marriage, the loss of his child, or his Vietnam experiences, he must essentially face all of these in one way or another and that kind of character work makes sure that even when the film is at its most unusual it’s also effective at progressing the story. Not all of it makes sense, but it’s there and most of it works to really give the film a strange depth if you’re looking for it.

As a frosting on an already fantastic piece of cinematic cake, this latest Arrow Video version is a God send for fans. The restoration looks crisp, the audio and score are enhanced (I adore the score to this film so this is the best part for me), and the special features are relevant for the collectors out there. There is a brand new hour long documentary on the film included on this disc that’s wonderful and features interviews with what seems like everyone that worked on this film. If you already enjoy House, then the new restoration and features will definitely make this a must own version.

House is not only a nostalgia wild ride for me, but it’s a damn fine horror comedy that doesn’t get nearly enough attention as it should. It’s quirky while blending the elements of horror and comedy with a strong enough dramatic foundation to make sure that it’s still relevant decades later. It’s perhaps not a film for everyone, thanks to a lot of its cheesy moments, but for those who enjoy the genre than I always recommend it as a must see. This release? Absolutely a must own. Written By Matt Reifschneider
Posted by DarkReif at 3:22 PM